The boys spent a week with their cousins (and went to camp) and generally had a great time. 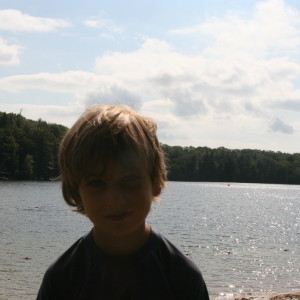 Beyond their cousins, part of the appeal is a very comfortable place to be, a huge playroom, a room with a climbing wall, a movie room and an arcade room – as well as lots of outdoor space in which to run around. I tried to repay our stay by working in the garden and yard, and doing laundry and dishes. Having to coach one’s child on what to do if he or she encounters a bear can be a bit disconcerting but apparently this is part of life in Amherst, New Hampshire. It’s hard not to be favorably disposed toward a state in which the license plates read “Live Free or Die.”

Among other activities, there was a hike, some playdates, and a hermit crab funeral (RIP Hermie and Happy). We decided to go blueberry picking one day and crossed into Maine. I loved the ‘Welcome to Maine’ sign. The tag line was “The way life should be.”

When we got to the blueberry patch, my sister told all of the kids we would have a contest – whomever found the largest blueberry would get a dollar (because, really, why not turn a friendly outing with cousins into a fierce competition?). We were all determined to win. At break time, we compared our loot. Somehow, despite C. and I having collected 5x as many berries as the kids, Malachi had some of the largest blueberries. His biggest one was easily double the size of any of ours. I walked the kids back to the van to get a snack and heard Malachi talking to his cousin Paige (5 years). She asked him where he found the blueberry and he said the biggest ones were on the smallest bushes. Paige said, “Really?” Malachi responded by saying, “Yes, really. Sometimes the best gifts come from the smallest things.”