We continue to make progress. Matt felt that some things on the boat obstruct his view while at the helm (e.g., the dodger – a canvas cover over the ladder down into the cabin; the gallows – a wood and metal support that would catch the incredibly heavy boom in the off chance it ever fell). I was against the idea of removing the gallows but it had already been done by the time I got back to the boat. We also had some workers come in and paint the anchor compartment (located at the foot of our berth). It smelled so bad that Matt and I slept in the salon – he on the longer bench and me stuffed into the bench at the table (a good 6-8 inches too short for me). I started laughing thinking that I used to complain our house was small; now we are all crammed into a boat. Everything in life is relative (even relatives). We also finally got the propane gas hooked up and the stove working. Two of the three burners work and the third is ok if lit by a match. The anchor hose is hooked up and working (this is used spray off the anchor chain when it is pulled up so smelly mud and gunk is not 12 inches away from our sleeping berth). The boys and I spent at least half a day sawing through the steel anchor chain to keep the 75 good feet and get rid of the rest of it. 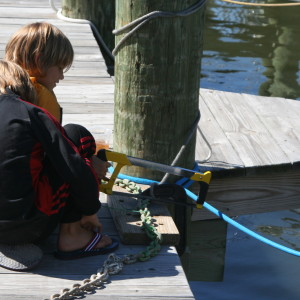 We want to get in the habit of going out for a sail every few days. It is too easy to put it off until everything is done – and the reality is that things are never done and you never leave the dock if this is your attitude. Matt wanted to raise all of the sails on this trip so we invited one of our dock neighbors to go with us. Richard has a Hinckley (they make really nice boats) so it was cool that he was so complimentary of ours. It is rare to see the mostly wood interior and some of the older craftsmanship (e.g., bronze/copper portholes rather than plastic; teak deck, etc.) that Tashtego has. Matt has a good eye so I like it when others appreciate his level of quality. We motored out into the bay and then got the sails up. The wind ended up being much stronger than was forecast. All I can say is that we were hauling! The ‘theoretical hull speed’ of our boat (i.e., loosely analogous to its maximum speed) is 7.5 knots. We were going 6.5 knots with the boat heeled over at least 30 degrees. THIS is the kind of sailing I love. I have stopped trying to intellectualize it and go more on sensing things – you can feel when the boat is in the groove of the wind and it’s just a blast. I love being at the helm and feeling like it is just holding the edge of the water. I ran down to get something from the cabin and all that was visible through the starboard-side portholes was water (generally the view is the horizon). We were heeled over so much that the boys were laying on the starboard deck trying to touch the water. There is no fear in those kids. I took some amazing photos – the portholes, the waves crashing over the bow, the sails, the boys hanging off the side – as Matt is yelling, “Really? Are photos that important? Can you just put that thing away and hang on?” It was only later that I realized the camera card was not even in my camera. Next time!