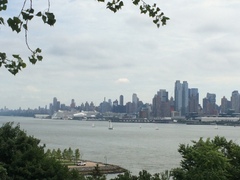 Coming back to NJ and NYC returns us to the sites of our previous lives (me at Columbia and Pfizer, Matt in NJ with clients in the twin towers). On Sunday, we take the PATH train over to Hoboken, the town where Matt and I each lived for about 7 years and where we met. We tour our old haunts. Matt tells the boys stories – how we met, where and how he proposed, where we used to live, etc. They express interest only when we talk about where we used to get ice cream. Monday is spent working on the boat and fixing the water tank.

At the museum, we debate about buying snacks for Matt.

On Tuesday the boys and I take the ferry over to NYC. We ride the subway, tour the American Museum of Natural History (neat gem and mineral collection, amazing IMAX movie on great white sharks) and stop for groceries on the way back to the boat. Matt stays behind to do an oil change and put an inside lock on the boat.

On Wednesday the four of us head in together. We have a great lunch in Hell’s Kitchen, finally find a camera store that can remove my black dot (yea!), and see a matinee of Cinderella. It’s the boys’ first Broadway show and they are transfixed (Matt later confesses he kept waiting for the Seven Dwarves to show up). After the show we go to a café across the street. Matt looks out the window and says, “I think that’s VV [a great friend from grad school and someone I was hoping to see].” “It can’t be” I counter. “She has a huge job and there’s no way she’s out of work at 4:30 pm.” We go back and forth like this and finally Matt says I really need to run after her and see. The woman is almost down the block by the time I catch up. I sneak up beside her and look over. It is VV! It is one of those one-in-a-million NYC moments. She screams and we hug. She had just left a dentist appointment. There are no coincidences in this world. She comes back to the café and we catch up for about 45 minutes. VV asks Matt what he’s thinking of doing with regard to his career after our trip ends. He sees a guy pass outside with a huge puppet on his hand. “Maybe that,” Matt says. She asks where we are heading and realizes she’ll be in Cape Cod with her family around the same time as us. We agree to meet up and tell her we’ll go out on the boat to see whales. 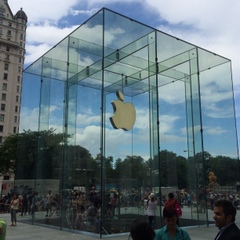 Leave it to Apple to have the coolest store around.

We get a late start on Thursday and keep forgetting it takes about 1.5 hours to get to mid-town. Matt has been having phone angst so we decide a visit to the Apple store is a priority. There are stairs underneath the glass cube that lead to the underground store. FAO Schwartz is conveniently located nearby. The boys and I tour the toy store but spend most of our time in the LEGO section. They pool their money and buy a set together. On the way out, Malachi sees a LEGO book and wants to read it. Although I don’t feel like waiting around, what exactly is a better use of my time at this moment? We all flop down on the floor near the book section. Malachi reads to Joshua while I flip through a book of photos called “Humans of New York.”

I’m expecting something touristy but it is humorous, real and occasionally moving. This was one of my favorites. After Matt finishes, we head back to have dinner on the boat with Matt’s friend Giuseppe and his family.