I have a good reason for not posting lately. Two of them, actually (see below). 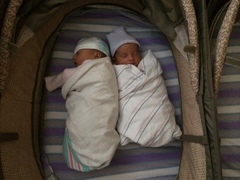 And, NO – they are not mine. My sister had twin girls about three weeks ago and I’ve been up in NH helping her (she also has a 6- and 3-year old). But more on all that later.

As to the trip up to NH, we stayed in Wellfleet, MA for a week and had a great time with Matt’s brother and his family – biking, beach, dinners, etc. From there, we sailed to Provincetown (where we saw whales) and then on to Salem, MA on August 23. Our boat broker lives in Salem so he came to see the boat. He loved it and said we will have no trouble selling it once we are ready. It is the only Lord Nelson currently on the East coast. We went to a 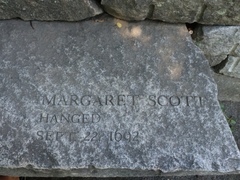 One of the stones dedicated to a Salem victim

Salem witch trial re-enactment and saw a park dedicated to those hung during the witch trials. From Salem, MA we left for Portsmouth, NH and saw a loggerhead sea turtle en route. We arrived in Portsmouth on August 26 and docked at a marina. Actually, it wasn’t even a true marina. More like an afterthought – the expensive indulgence of the building’s owners who really wanted a marina. It’s essentially one dock outside an office building with a shower inside the building parking garage. I ask Matt if it’s safe. He says it’s fine. “There’s no one there after 5 or 6 pm. It’s a deserted parking garage – it’s completely safe.” Yet more evidence that men and women inhabit completely different worlds. Most women I know have many thoughts/emotions that come to mind when hearing the phrase ‘deserted parking garage.’ Feeling safe is generally not one of them. 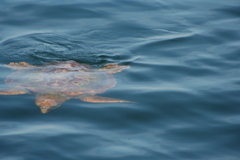 Matt and Joshua make the trek to get the van: a trolley from downtown Portsmouth to the bus station; a bus to Boston; a ferry from Boston to Provincetown; a shuttle from Provincetown to Wellfleet. They leave at 8:20 am and get back at 9:20 pm. This is the last time we will be getting the van. We have decided to leave it here when we head south again.