Just when I was still patting myself on the back for fixing a spurting water hose that had detached, a dear friend let me know that a recent post should have read ‘Anchors Aweigh’ and not ‘Anchors Away’ [as I had written it]. This illustrates the problem with this whole trip – they let ANYONE (even unqualified individuals such as myself) out on the open waters. It’s kind of like having children or owning a house – one doesn’t really have to be that qualified to do it. I really have no idea what I’m doing (with the trip, and maybe with life as well). Only time will tell…

Our last day in St. Augustine was pretty great. We went to visit the Alligator Farm & Zoological Park and finally saw lots of alligators – including albinos and babies. We also saw komodo dragons, lemurs and various exotic birds. The park had a zip line and obstacle course that went right over the alligator enclosures (I have to confess that my morbid side was hoping someone’s foot would slip …).

After that, we walked to the St. Augustine Lighthouse & Museum and climbed 219 steps up to the top of the lighthouse. The view was spectacular and we could see the marina from the top. We never got to the pirate museum but maybe on the way back. 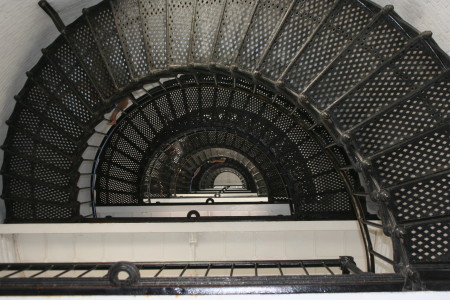 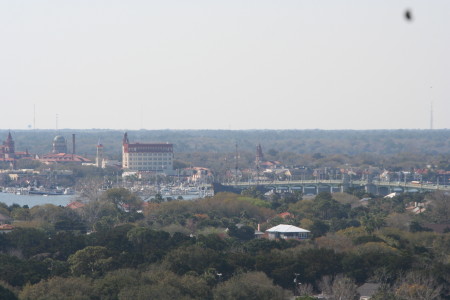 (and yes, I see the consistent black dot that appears in the photos and have pulled my camera apart 3 times and can’t quite figure out where the speck of dust is. Eventually I’ll figure it out… or not).

On Sunday we arrived at St. Augustine, FL where we all waited (stuffed dogs included) for the bridge to open so we could go to church at the Cathedral Basilica. St. Augustine is one of the oldest towns in the US, dating back to 1565. 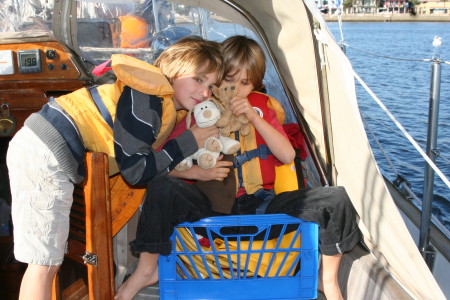 The marina we stayed at (directly beyond the bridge) had a huge old schooner and was within walking distance to almost everything. After church, we went to the Colonial Quarter and saw a blacksmith working, witnessed a musket being fired and saw a historic village. We then went to “The Fort” (El Castillo de San Marcos) where costumed soldiers shot off cannons firings. A pirate ship in the harbor returned the fire (a great view of the Fort from the water). 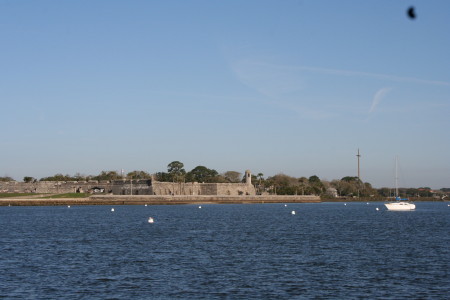 On the first night in St. Augustine, I’m sitting in our berth by myself, as Matt has gone to shower. It sounds like I’m literally sitting in a small bowl of Rice Krispies cereal. I can hear snapping, crackling and popping sounds all around me. I’ve heard them two or three times before – and all I can think is that termites are quietly (or not so quietly) devouring the insides of the boat. I’m hesitant to tell Matt about it because of how much constantly gets added to the ‘to do’ list and yet I’m mindful of his warning to tell him about anything unusual. Hesitantly, I mention it when he returns. “Oh”, he responds, “those are just tiny shrimp making the sounds. I read about them in the ICW guide.” What a relief to know the boat won’t slowly dissolve into the water one night while we are sleeping.

We left Jacksonville and anchored at Pine Island South, just north of St. Augustine. It was good practice to anchor again and the night was calm. After enjoying the sunset, we had dinner and went to bed. On leaving in the morning, we saw a dolphin on the edge of the anchorage. I’m almost positive that there is one around every time we set off on a new leg of the trip. It almost seems like a benediction – a good-luck blessing as we leave.

We were in Jacksonville, FL for about a week. We had the engine serviced, got our mail, and Matt took the train up to get our van. We met a wonderful family who recently bought a boat and are planning to sail it to Brazil for the summer Olympics. We saw what Matt swears was a 15-foot alligator in the marina. The dock workers say it was a manatee. We split the difference and decided it was definitely a mana-gator. We also celebrated my birthday with a much-needed haircut, a Thai dinner out, and going to see the movie Frozen with the boys. It was a fantastic movie – just when you think the damsel in distress will be saved by a man in the stereotypical male hero role, she ends up saving herself. It just goes to show that you can be your own Prince Charming. 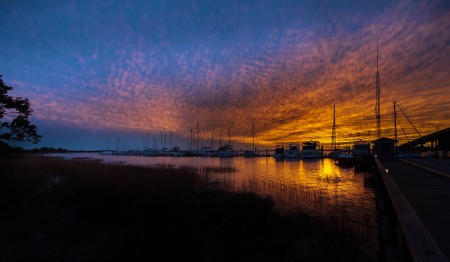 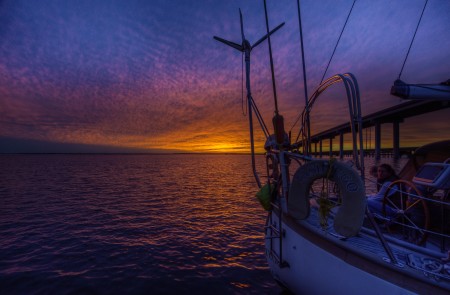 [beautiful but, sadly, not my photos. They are by David Fisher (JandDImages) from Jekyll Island, GA who caught our boat in one of them].

[Embarrassing update]: It turns out that we got towed to Jacksonville because … (wait for it) … we ran out of fuel. So, yes, unfortunately it was user error. What happened is that instead of drawing from both fuel tanks, Matt had switched over to one. After throwing up the sails, we didn’t even bother to poke around and see if we could figure out what was wrong. In our defense, we have no fuel gauge (something this little incident made me determined to get installed). It turned out well because if we hadn’t run out of fuel, the mechanic would not have noticed air in the fuel lines, which led to the discovery of a loose engine hose which we were then able to fix. Once again, our towboat insurance has paid for itself many times over at it probably would have cost $3K to get towed that far. Continuing with the theme of this trip, it all works out in the end.

We took it as a good sign that we passed into Florida on the first day of March (our boat is the triangular shaped object in the bottom right). 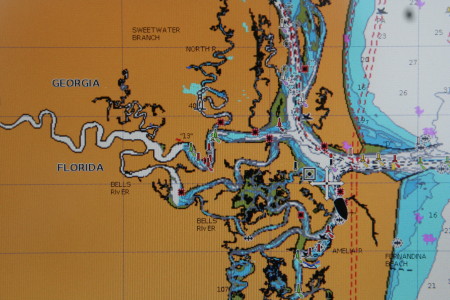 Crossing the St. Andrews Sound brought us fairly close to the Atlantic. The water was pretty choppy and things were flying all around the cabin. Everyone started to feel a little nauseous so we put on acupressure bands and sat with Matt up in the cockpit looking at the horizon. As we passed Fernandina, the engine hesitated and then the RPMs started dropping rapidly. We quickly shut off the engine and threw up a sail. Matt looked at me like he couldn’t believe this was happening again. I just started laughing. He looked at me and said, “Agh! Why are we doing this?!” “That,” I said, “is equivalent to asking that same question during childbirth. It’s irrelevant, it’s not helpful, and it just exacerbates the pain. Let’s ask it again once we get to someplace we want to be.” We decided that all of the bouncing around may have dredged up sludge from the bottom of the fuel tanks. Since the engine was overdue for a servicing, we called Boat U.S. and they towed us down to Jacksonville, FL where we had already scheduled an appointment. That night, I said that at least we made it to Florida. Matt said, “Yes, but we didn’t even limp across the finish line – we got dragged over it.” That, my friends, is beside the point.