Matt’s mom came in for a visit. She arrived Thursday and we took her out for a sail up the Severn River. 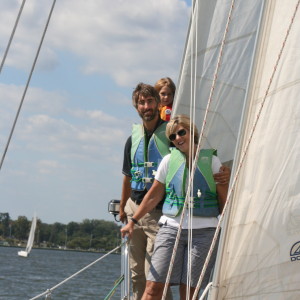 Passing under bridges is incredibly freaky – it looks like there is no way there will be enough clearance for the 58-foot mast and yet, somehow, there is. Matt checked the clearance ahead of time but didn’t make this very explicit. And then, upon approaching, started yelling, “Ahhh, I don’t know if we’ll make it! Watch out for the mast!” Poor Joshua started screaming “Dad! Dad! Turn around! Turn around!” and almost went into hysterics. The optical illusion makes it seem for sure that the top of the bridge will pull off the mast. 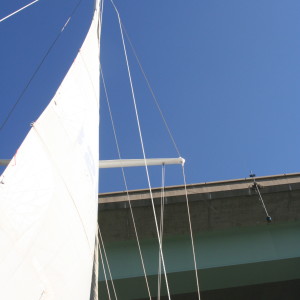 The actual sail was nice but we had a good scare at one point. Matt had gone up to talk to the boys and tell them to get back in the cockpit – at the last minute, he changed his mind and had them stay up front with his mom. I was at the helm. He then loosened a line and the boom came crashing down on the deck – right where the boys would have been. This could have killed them. Clearly, the gallows is going back up immediately. The sailing was good – we went up the river ‘wing-on-wing’ which is when there are two sails perpendicular to the boat – in opposite directions. It looks very cool from afar (but, alas, I’m on the boat and can’t capture that). 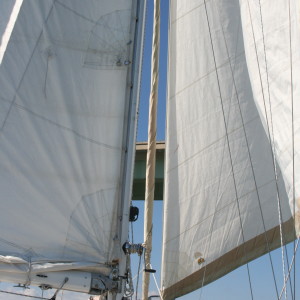 Mom stayed on the boat with us Thursday night and then took the boys to Baltimore for a two-night sleepover (thanks Nannie!). This gave Matt and I some much-needed space to make progress on the boat (which immediately felt 8 times bigger without those two constantly-in-motion little bodies).

We want to get in the habit of going out for a sail every few days. It is too easy to put it off until everything is done – and the reality is that things are never done and you never leave the dock if this is your attitude. Matt wanted to raise all of the sails on this trip so we invited one of our dock neighbors to go with us. Richard has a Hinckley (they make really nice boats) so it was cool that he was so complimentary of ours. It is rare to see the mostly wood interior and some of the older craftsmanship (e.g., bronze/copper portholes rather than plastic; teak deck, etc.) that Tashtego has. Matt has a good eye so I like it when others appreciate his level of quality. We motored out into the bay and then got the sails up. The wind ended up being much stronger than was forecast. All I can say is that we were hauling! The ‘theoretical hull speed’ of our boat (i.e., loosely analogous to its maximum speed) is 7.5 knots. We were going 6.5 knots with the boat heeled over at least 30 degrees. THIS is the kind of sailing I love. I have stopped trying to intellectualize it and go more on sensing things – you can feel when the boat is in the groove of the wind and it’s just a blast. I love being at the helm and feeling like it is just holding the edge of the water. I ran down to get something from the cabin and all that was visible through the starboard-side portholes was water (generally the view is the horizon). We were heeled over so much that the boys were laying on the starboard deck trying to touch the water. There is no fear in those kids. I took some amazing photos – the portholes, the waves crashing over the bow, the sails, the boys hanging off the side – as Matt is yelling, “Really? Are photos that important? Can you just put that thing away and hang on?” It was only later that I realized the camera card was not even in my camera. Next time!

We got the sails back up yesterday and went out for our first sail as a family today. Matt and I were both a little nervous (it’s a Saturday and there are always regattas) so we took it easy. We motored out and just hoisted the main and had a nice easy sail back in. There is something they call ‘dock glue’ which is essentially that the longer you are at the dock, the harder it is to get out there. We wanted to get it done as soon as the sails were back up so that felt like some small accomplishment. Joshua lost his second tooth today. After it fell out, he spent time brushing it for the tooth fairy and then was admiring it on deck in the sunlight. He then dropped it and it bounced and fell into the water. The poor kid – he has yet to have a visit from the tooth fairy because he literally has lost both of the teeth that have fallen out. Despite my pleas to immediately put it in an envelope and under his pillow, he insists on carrying them around all day. I told him that we might be able to write the tooth fairy a note and explain the extenuating circumstances. We went out to dinner with L&C to celebrate the day’s accomplishments. 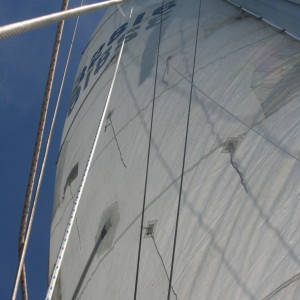 The saga of the smelly head (i.e., toilet) continues. Matt and George worked on it all day (09.09) – changing pipes and taking out anything that might be the culprit. Matt said he is going to start crying if this doesn’t fix the problem … stay tuned!

July 5, 2013. I had my first formal sailing class today. I hated it. I probably shouldn’t say that, given our planned trip. I’m hoping it is a short-term reaction to being overwhelmed. We were supposed to sail from Annapolis, MD up to Chestertown, MD for the sailing class. Instead, because of the condition of the boat (water, toilet and fridge all not working), we decided I would drive. I arrived in good spirits and excited to figure out this sailing thing. After being lectured for about 3 hours in what seemed like a foreign language (e.g., instead of a boat having a right and left side, it has a port side and a starboard side), five neophytes finally got on the boat with the instructor (I’ll call him ‘The Sargent’). He tried to seem easy going but he was pretty uptight – rather understandable given that he is trying to shepherd five beginners through the intricacies of undocking a large boat that costs much more than I make in a year – while at the same time keeping us from ramming said boat into other, much more expensive, boats.

I should say that I have some trouble in the physical world. I’m usually in my head, rather than in my body. I’ll find bruises on my legs and have no idea how they got there. I recently gave a doctoral student a ride and found myself going around the same level of the parking garage several times before I realized it. I have no sense of direction and don’t react well if I don’t have time to plan. This was well-illustrated the time Matt and I were hiking and came upon a 400-pound bear. I turned the corner first and stopped short in surprise. Once the shock subsided, I was then trying to figure out how to respond. What went through my head was that bears have terrible eyesight but an excellent sense of smell. Therefore, we needed to be upwind of the bear. I then began walking back and forth trying to determine if we were upwind or downwind of the bear and wondering how one determines the direction of the wind. Matt, being much better in emergency situations, simply grabbed my arm and got us AWAY FROM THE BEAR. Similarly, sailing requires immediate responses and is very much situated in the physical world. There can be very little time to plan. Like the time a boat was headed right at us during class and Sarge is screaming at me, “Steer to port! Steer to port!” – apparently thinking that the louder he is, the better I will remember the earlier lecture. What I yell back is something like “Just tell me ‘left’ or ‘right’!” Follow-up confession: I still can’t remember!

If we ever figure out how to connect our boat GPS to our blog map and you see the boat has gone in a series of small circles in the Atlantic, you’ll know I was on night watch.