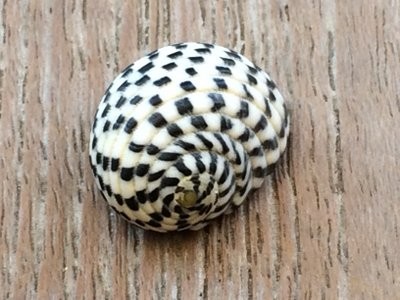 A very MacKenzie-Childs-looking shell (for you, Nannie!)

Our Wi-Fi has been sporadic at best since we returned to the US side of the Virgin Islands. I realized I had a bunch of photos that I never posted from the end of January from our last few days on St. John. We stayed in Caneel Bay for two or three nights while going back and forth to Cruz Bay. The boys were able to kayak to the beach to look for shells END_OF_DOCUMENT_TOKEN_TO_BE_REPLACED

It’s amazing what a shower will do for one’s spirits. This is a small sign that was taped to the marina counter. Given last night’s rant, it seemed aimed directly at me. Point taken. [Because if I were anywhere in the US where it’s freezing cold right now and I read that rant from someone in the Caribbean, I’d be thinking, Just shut the hell up. You’re in the damn Caribbean!].

But not to the extent of deleting that blog post. This functions as my journal and will be my memories of the trip and all those petty annoyances are part of it. But that’s all they are – just a part of it. And a very small one at that. And, they were only symptoms – not the actual source of the problem. The source of the problem is my old frenemy … Fear. It rears its fearsome head and has me focusing on inconsequential things rather than actually dealing with the meaningful stuff. As Matt would ask, “What’s the source of the fear?” END_OF_DOCUMENT_TOKEN_TO_BE_REPLACED