This post is not about the boys getting in trouble, nor is it about making any huge leaps in my personal development. It is about simple math. This is a photo of our depth meter, registering a depth of 3.6 feet. 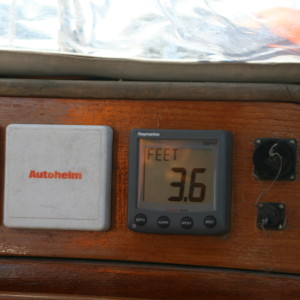 Our keel requires 6 feet. If you are mathematically challenged, I’ll do the math for you.  3.6 feet of depth – 6 foot keel = PROBLEM!  We ran aground. It was in Lockwoods Folly (a sailor friend suggested it be renamed Matt & Diane’s Folly). We could see a sailboat ahead of us that had run aground so we overcorrected the other way – right into a shoal (thankfully I was not steering, my sailor rating is already back down to a C-). We tipped at a 15-20 degree angle – just enough that the boys’ snack kept sliding across their plates. It took a minute to register what had happened although watching the depth meter quickly inch down is a bit freaky. The captain remained calm and we ended up laughing about it. I told Matt that anyone can go around a shoal but it takes some skill to be able to really nail one enough that the boat sticks. It was actually kind of nice that it finally happened because sometimes the fear of something happening is worse than the actual event. 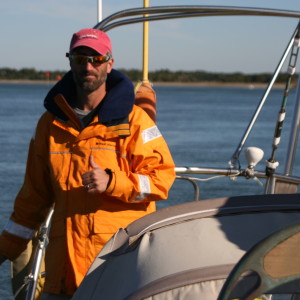 A helpful motorboat tried to pull us out but Tashtego didn’t budge. We have Sea Tow insurance (the AAA of the nautical world). They said it made no sense to come out until the tide started coming in so we waited around for a few hours. When Sea Tow showed up, they tried to move us but just ended up tipping the boat in the direction we needed to go. 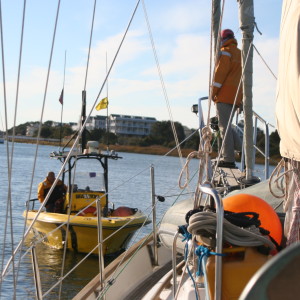 The driver chatted with Matt for a while I went below to start prepping dinner. When the tide was up, Matt yelled down that they were trying again. What I had not planned on was that the boat would tip much further than it already was. I was wrong. As everything began sliding, I grabbed the full dish rack before anything went over the edge of the counter and leaned over the cutting board to stop everything from sliding off. At this point, I’m laughing and thinking it can’t get much worse. Then, out of the corner of my eye, I see the pressure cooker inching toward the edge of the stove. I swing my leg up to block it and reach it just in time. I wonder how long I will have to wait when, suddenly, we are free and newly upright and dinner is saved. In the meantime, another sailboat ran aground behind us. We decide to call it a night because we don’t want to be navigating in the dark. There have been enough adventures for today. We find an empty dock along the ICW and tie up for the night.