Matt has occasionally made comments about our sailor friends “dropping like flies.” It seems that almost everyone we know who is going south has had something fairly major go wrong that has unexpectedly kept them in some port on the way down. We have been fortunate with only minor incidents so far. Until today. We are in the Maccamaw River near Butler Island. The landscape is beautiful, awash with haunting and surreal trees. 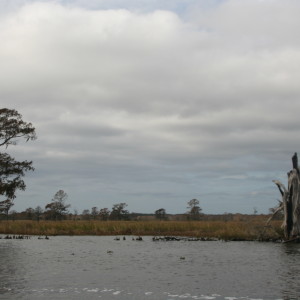 We are motoring along when Matt notices a higher-pitched whine in the background of the engine noise. I navigate while he pulls out the ladder to inspect the engine. He doesn’t see anything amiss and comes back up to the cockpit. Within 20 minutes, we hear a pop and the engine completely cuts off (lesson #3: if something doesn’t sound good, shut it off immediately). No slowing down or idling, just dead silence. We quickly throw up the staysail to maintain steerage and try and stay in the center of the channel while we decide what to do. We eventually call SeaTow (they have already earned their monthly premiums) and they tow us to a marina about 45 minutes south.

Matt and I relax in the cockpit and joke that maybe they can just tow us all the way down to Florida. We have the name of a local mechanic and he is at the marina when we arrive. After running some diagnostics, it is determined that our engine is toast (we may have broken a connecting rod). We kind of knew when we bought the boat that it might eventually need a new engine but we didn’t think it would happen so soon. Matt asks the mechanic for a rough estimate on the price. He sighs and says, “Well, the engine alone will be 14.” One of the things I have loved about heading south is the increasing southern drawl and the heightened politeness and manners. I decide to have some fun with him.

Me: (trying to look oblivious) “Only fourteen dollars? Wow, that’s not nearly as bad as I thought it would be.”

I see the mechanic’s face tighten as he probably wonders if all people without a drawl are this ignorant and wonders how to correct the situation without being rude. He clears his throat. “Ah …, perhaps I should have been more specific. The engine is fourteen thousand dollars – and that doesn’t include labor.” He waits to see our response. We both laugh and say we were kidding. Immense relief washes over his face. When we first bought the boat I was amazed at the tiny, odd-sized storage spaces. And even more amazed to realize that the second biggest storage space was a huge recessed liquor cabinet. Now I get it. I told Matt we should take up drinking.