I called the realtor today and he said there had been issues with the phone system and he hadn’t gotten my messages. He said that he had a house closing and lots of showings and that Tuesday would be a better move-in date. The boys and I decided to explore the town, made easier by the fact that we now have our car here. Since we’d finally be able to cook our own meals again, we went to the store to check it out. They have a supermarket down here called the Piggly Wiggly (and can I just admit that I had heard of it in southern-themed movies but always thought it was a joke?). I came back and told Matt that I will never complain about anything again. The people who walk around there clearly do not have the luxury of the choices we have made and true hardships are big things like poverty, disease, death, and natural disasters (although existential angst can sometimes feel like it fits into that category).

We arrived back in Georgetown, SC a bit worn out from the road. I had made three phone calls to the realtor in the previous week and hadn’t heard anything back so I was a bit frustrated about where we would be staying. The last message he left referenced the first two week in January so I was concerned the whole deal would not go through. We got back on the boat and it was cold and smelled like oil and engine. The electricity wasn’t working for some reason which meant there was no lights, water or stove (although the stove runs on propane, the solenoid runs on electric). There were also more leaks and Joshua’s berth cushion was soaked. I confess to having a bit of a meltdown. I don’t remember the exact words I used in my little fit but the word ‘stupid’ came up a lot (e.g., stupid boat, stupid trip, stupid idea), probably combined with some more colorful language. I ended by saying (probably yelling) that I just wanted to be somewhere comfortable for a few days. I knew I was being pathetic and irrational but couldn’t quite stop myself. Thankfully, the boys were still playing outside. A few years ago, I remember telling Matt that I have yet to feel like a ‘true’ grown-up (i.e., competent, capable, mature, etc.). I kept waiting for the bank and the state to show up at our door and revoke our mortgage and parenting privileges because they, too, realized we were just not qualified to have either a house or children (well, at least we no longer have a house). Matt, to his credit, was able to witness my complete meltdown and still be supportive. He just shook his head and said, “It will be ok. Let’s get a hotel and then we’ll get dinner and it will be ok.” And then, after we left the restaurant, I had a voicemail from the realtor saying someone had just left today and that Monday should work. Why is it that just when I lose faith and have a breakdown things start to work out? I can almost hear the Universe shaking its head and muttering, “Ye of little faith… if you had just held it together for a few more hours…”

We drove from SC to MD with my parents and picked up our van in Annapolis. My parents headed home to NJ and we drove to Baltimore for Thanksgiving with Matt’s sister. I’m not sure if it’s funny or pitiful (I vote for funny) that our month-long voyage going south by boat only took one full day going north by car. Before disembarking from the van at his sister’s house, Matt gave us a quick pep talk about getting our bags out quickly so that potential hoodlums in the urban area would not see a van packed full of stuff. His plan was shattered when he opened the back door. It sounded like an avalanche as approximately 6 gallons of Legos poured out from a container down into the torrent of rushing water in the gutter. I wish I had taken a photo of them as the colors were startling against the muddy water. Poor Malachi was yelling and scrambling trying to retrieve his precious pieces as they were whisked down the road in a watery torrent with leaves, sticks and other detritus.

Thanksgiving was great – good food, great company and lots of hanging out (not to mention heat!). Activities included walks, cooking, and going to a Christmas tree farm to help L&C pick out their tree. It felt amazing to be walking through huge fields of trees and to be in a wide open space again. 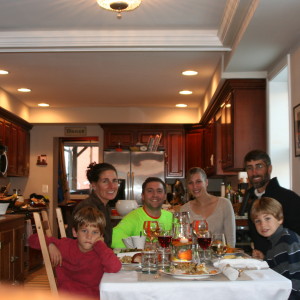 My mom had generously lent us her minivan so that when we sold our house we had two minivans to transport some of our belongings down to the boat. Both of the vans were left at the Annapolis marina when we set sail at the end of October. My parents drove a rental car from NJ to Annapolis, picked up their van and drove down here to visit (the plan was they would then drive us back up to Annapolis so we could get our van and then go to Baltimore for Thanksgiving with Matt’s sister). We had a great visit with them – some meals on the boat and a short visit to the beach. 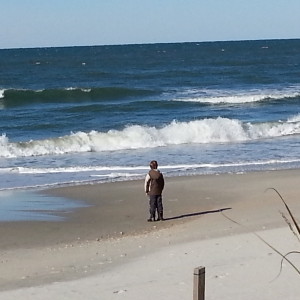 While they were here, I was also trying to find a rental. The places on the beach are exorbitant – even in the off-season. I shifted gears thinking “How about a cute cabin with a fireplace and lots of outdoor space?” I found something listed as a “spiritual retreat” with beautiful photos. I contacted the owner through the site and explained our situation. He said he would work with us on the price (50% off) and offered to pick Matt up Saturday morning to show him the place (he had a small truck and could only fit one of us). He even invited us to have Thanksgiving with him and his family! Matt got back from the tour, was iffy about it and said I should see it for myself (this was not a good sign since what he considers ‘ok’ is usually rated ‘no way’ by me). We all went out to see it Sunday afternoon. It was out in the middle of nowhere, which I loved, but also seemed to have a lot of poverty in the surrounding areas. The smell of the place could best be described as ‘funky.’ It was one of those instances where the photos don’t match the reality. It didn’t exactly have ‘Deliverance’ written all over it but I would not have been comfortable out there alone. The owner also mentioned hunters in the area so our #1 criterion of safety wasn’t really met. It was also quite a ways from the marina so it would be a lot more travel time to oversee work on the boat every day. However, the real reason we declined the house is because we knew everyone would want to come visit us once they saw the ‘guest house’ on the property. 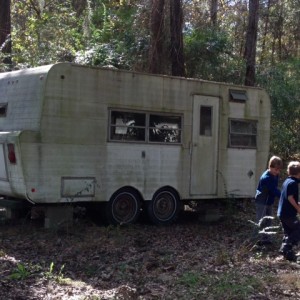 If we have to get stuck somewhere, this is a pretty great place to do it. It is a small but vibrant town. Apparently it was rated as one of the top 100 U.S. towns in which to live. It has great restaurants, a chocolate shop, a place with fresh bread, and a number of upscale stores. It just feels good here. I walked around town with the boys and made it to the library which is about 1.5 miles away. On the way back to the boat, I went into a realtor’s office to ask about furnished apartments (as we cannot be on the boat for the engine overhaul). He said he has three units that he rents and may have one available for the period of time we need it (first two weeks of Dec). He showed it to me. It is a 2-BR duplex with a spiral wrought iron staircase – beautifully furnished but a bit pricey. It is only a few blocks from the marina. Matt thinks we should see if there is anything available on the beach (a 20-minute drive from the marina). 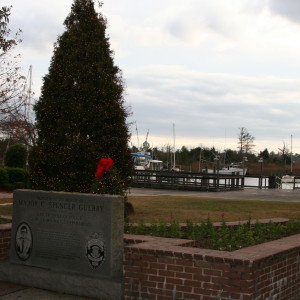