A few years ago we had the annual celebration of Mother’s Day and Father’s Day in May and June, respectively. “Why,” one of the boys asked, “isn’t there a day for us?” “What do you mean?” I said, “You each have a birthday every year.” “Well so do you,” they countered, still feeling there should be a separate day of celebration. And so, … Brother’s Day was born (Hallmark still hasn’t figured out this is yet another money-making opportunity). We celebrate Brother’s Day the weekend after Mother’s Day to ensure that we don’t forget it. [Matt’s card for the boys]. 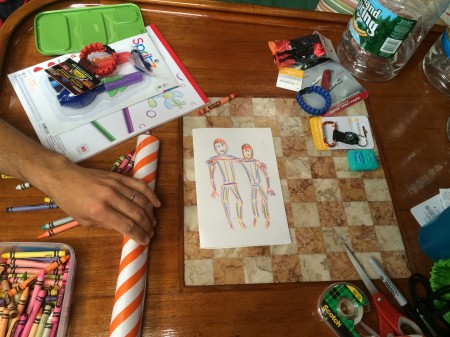 I had the flu so Matt did the preparations. He came back from the store and dumped all the stash on the table, saying he needed help deciding who would get what. I informed him that he set a new bar. I generally give a small token gift and a chocolate. They’re supposed to give a gift or do something for each other. There was a small Superhero suitcase, school workbooks, 30 feet of rope (sailors love rope), carabiners, a penknife, and a magnesium fire starter (you scrape shavings and then light them), among other items. I looked at Matt. “Really?” I asked. “We’re going to give a 6-year old a knife and a fire starter … on a boat? Maybe we should also give him some gasoline, a beer and the keys to the car.” The boys received Legos from their grandparents and then chose to have lunch at PF Changs, during which they informed the server it was Brother’s Day. He looked surprised, then amused. (postscript: Regardless of our decision to hold back the fire starter, the boys loved their gifts and had a wonderful day).