Today’s date is what a novelist would call ‘foreshadowing.’ As sailors are a superstitious bunch, I decide not to tell Matt it’s Friday the 13th. It is our final day of travel before reaching Annapolis, MD. Both of us can’t wait to be somewhere permanent. We see storm clouds around lunch but they are blowing west of us. We are so close to Annapolis – literally about 20 minutes from the marina. If we head in, we will go right into the storm. There’s no way we can outrun it (I mean, we probably could if we were on land and actually running, but not going 5 knots in a sailboat) so we head back out to the Chesapeake. The lightning and thunder seem like they are right on top of us. Which is what you want, really … to be stuck in a lightning storm while sitting in a giant puddle and holding a 60-foot metal pole up in the air. There are two big metal tankers out there with us. Matt maneuvers the boat to be closer to one of them. At least they are taller than us and have more metal. Matt thinks one of them gets hit three times. [A link to a video of part of the storm is below. Matt has no idea my camera was on video … my first attempt so bear with me (if the link doesn’t work, you may need to cut & paste into your browser). Turn the volume up to get the full effect of the thunder]. 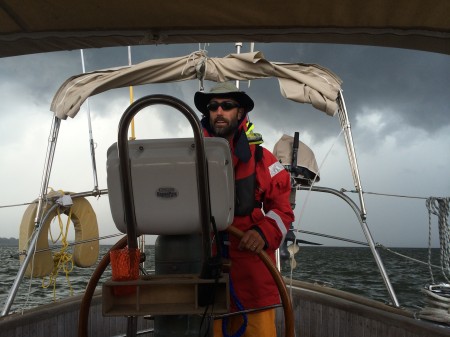 It lasts at least an hour. Matt, my hero, is out there braving it on his own. Malachi and I cuddle down below while Joshua sleeps through it. We are monitoring things on VHF 16. We hear the Coast Guard issuing a man overboard alert (he was knocked off a sailboat but was found an hour later, unharmed, floating near the bridge). There were also alerts about a capsized boat. We feel pretty lucky. We go out to dinner to celebrate our return. The server tells how she worked in a marina in which the owner was ½ mile out in a lightning storm. They saw lightning hit his boat and he disappeared. He died before the rescue boats even got there. A comforting tale which I was glad to find out about post hoc.