It’s our first overnight sail. Both Matt and I are a little freaked out – it will be about 30 hours, weather depending, with both of us taking shifts. We leave at 7 am and start off sailing but only go 1-2 knots. At this pace, our 30-hour sail might turn into 3 days. After giving it a few hours, we end up motor-sailing. Shortly after leaving the Delaware Bay and going offshore, we have our first whale sighting. Matt spots the spout. In the distance, we see the tail and the spray from its blowhole. We all cheer – an early and unexpected gift from the sea. Joshua throws his little arms into the air and yells, “Yesssss!” 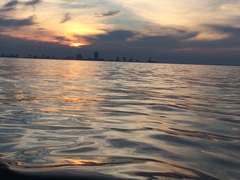 Matt has timed the weather perfectly. It’s a peaceful evening and the water is glassy and smooth. We’ve agreed that I will take the first watch and that Matt will put the boys to bed at 8 pm and then try to sleep himself. I’m not sure who is more nervous about my watch – Matt or me. I keep reminding myself to stay alert and that everyone’s safety depends on it. I remember Matt’s story about helping to move a sailboat from NJ to NC. It was Matt, Joe (the owner) and Joe’s brother. Joe’s brother was on watch in the middle of the night, during which Joe and Matt were violently awakened by the floodlights and blaring horn of a tanker bearing down on them, demanding to know the sailboat’s intention. Apparently Joe’s brother was lying on the deck staring up at the stars while the sailboat went in circles in the middle of a shipping channel. I cringe when Matt tells this story because I can imagine myself doing the exact same thing. The best part of the story is the boat’s name. Joe had to get on the VHF channel and respond to the tanker, “This is In Harm’s Way.”

It’s dark and I can see Atlantic City behind me in the distance – garish lights reminding me of Hong Kong or some honky-tonk bar. We are still close enough to see the shoreline. It is laid out like a jeweled bracelet – glittering emeralds, topaz, diamonds, sapphires, amber. As it grows darker, the horizon disappears and it’s difficult to distinguish tiny tanker lights from the stars. Every so often, the clouds ahead clear and I can see a planet or a star. They shine so brightly there is a trail of light toward the boat, seeming to draw us further north. I look ahead and after a while see the North Star. I think how comforting it is to be guided by it. The true North. Half an hour later, I see my true north 30 degrees east and realize it’s actually an airplane. So much for my celestial navigation skills.

I check the sky, the chartplotter and the horizons every 5 minutes. In between, I do get lost in the stars but also in the phosphorescence. I can’t remember if they are tiny plants or animals but they glow in the water. It’s the first time I’ve seen it. Every 3 seconds, the boat creates a wake that spreads out for about 12 feet. On each wave, it looks like there are 10-12 tiny diamond surfers riding it out. I hang over the side of the boat watching them (jacklined in of course). At 12:30 am, I see an orange light that seems to be getting closer. I can’t tell what it is. All of a sudden I realize it’s an orange-gold moon rising from the horizon, huge and startling. Matt takes over at 1:00 am but I can tell he hasn’t really slept. I go down below at 1:30 to crash and come back up at 5:30 am. 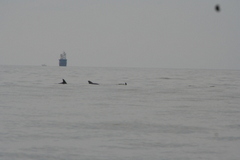 Before 7 am, I’ve seen two pods of dolphins and a number of manta rays. New Jersey, where we plan to rest for a few hours, is off our port side.