On Monday we tour the Nautilus submarine, the first sub to pass under the North Pole. We drive to New London to see the Nathan Hale school house and have lunch with a fellow ex-traveler. Chuck sailed with his post-college daughter for 8 months and we bumped into them in various places down the east coast. He lives in New London and says the trip with his daughter was ‘transformative.’ I love to hear that. I ask about the transition back to land and he says that it’s rough (surely a nice shower and a dishwasher is some consolation, isn’t it?). He misses the not-knowing-what’s-next aspect of it.

The marina has plenty to entertain the boys. There is a nest of baby barn swallows and Mother Duck and her brood. The boys feed them some bread and we look for jellyfish. That night, Malachi holds on for a very long time when I hug him after tucking him into his berth. He nestles into me making little sighs of satisfaction. I can feel his eyelashes brush my cheek. From a human being standpoint, he’s really not that much older than a duckling. I wait for him to let go first.

On Tuesday Matt gets the van’s muffler fixed and works on the bilge pump while I take the boys to Mystic Seaport. It’s a huge living history village and well worth a visit. We easily could have spent a second day there. 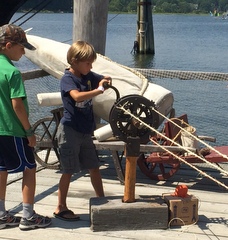 The boys made candles, wrote in ink with quills and nibs, made a toy boat, and helped make a rope. We get to bring a piece home and then watch a blacksmith work. It’s easy to see how much fun the boys are having. Our last stop is the planetarium. Malachi went to one on a school trip and tells Joshua he’ll love it. It’s not pre-recorded; there is a live guide. After some basics, he focuses on the summer stars we’ll see tonight and starts on the constellations. I’m sitting in between the two boys. Our guide points out Aquila the eagle and traces the constellation with a red pointer. “Oh, I see it!” Malachi whispers. On my other side, Joshua says, “That does NOT look like an eagle.” He points out Ursa Major and Ursa Minor (Big and Little Bear). “Oh, I see them!” Malachi whispers. On my other side, Joshua says, “Those do NOT look like bears.” This dual commentary continues for Scorpius, Sagittarius, Cygnus, etc. That night they both look for constellations in the sky.