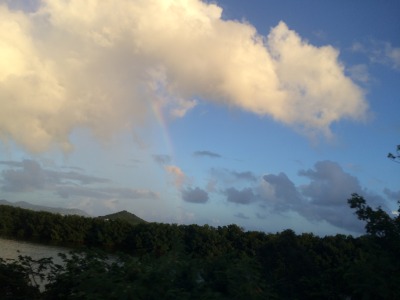 It’s raining when we arrive on St. Thomas. The boys look at me with  disbelieving Are you kidding? expressions on their faces. I tell them it’s probably just a quick storm. Indeed, it blows over in five minutes. Matt picks us up from the airport and we ride in a van across the island to Red Hook where the boat is in a marina. On the way, we debrief about his passage. I say something about the captain. Matt gives me a look and says “calling him ‘captain’ is being overly generous.” I hear about some of the travails – a man who is frequently wrong but seemingly never takes in such feedback (and therefore never apologizes). He continues to give blustery advice to the end (most often unsolicited) in order to preserve his own self-image as the expert sailor. I cannot imagine being married to such a person. As the van climbs up and over the numerous hills, Matt and I talk about finances. I share my perspective that, once the estate is settled, it will be his dad who is helping us finish out this last part of the trip. As the van rounds the bend and the bay comes into view, there is a rainbow arcing down through a cloud. To understand the significance of that rainbow, you would have had to be at Matt’s father’s funeral in May 2013. The car ride there was somber and quiet. I was driving and Matt was going over his father’s eulogy. Everyone was in their own mind space. I was looking out the window at the gorgeous day and thinking a rainy, miserable one would have been more appropriate.

Everyone was in such pain and I recalled Matt’s sister crying and saying, “I just need to know he’s ok.” In my head, I asked him Cal, can you send us a sign? Everyone really needs it. The military service (Cal was a Vietnam vet) was beyond moving and Matt gave a beautiful eulogy. Every so often, I’d think Ok, now’s a good time. How about now? There was nothing. After the service, we walked over to the funeral plot where the minister said a few words. Still no sign. I was so disappointed. The service was formally over and the group was disbanding. For some reason, I kept looking around at the sky. Finally, behind me, I saw that there was a rainbow. I ran over to Matt’s sister. Everyone started noticing it and taking pictures. Since then, there have been a number of times where we would (together or individually) be thinking or talking about him. And then see a rainbow. Thank you Cal. For then – and for now.