Some of our travels

It’s the day before Christmas Eve. I had imagined (and told Matt) that I wanted to find a beautiful resort or bay in which to be at least 3 or 4 days before Christmas so we could relax and prepare. I imagine projects with the boys in which we make homemade cards, decorate the tree and the boat, and generally relax. At exactly the time in which I was constructing these lovely family tableaus should have been the time I realized I was setting expectations (I once read that expectations are simply anticipated disappointment). Instead, we find ourselves working on the head … all day. 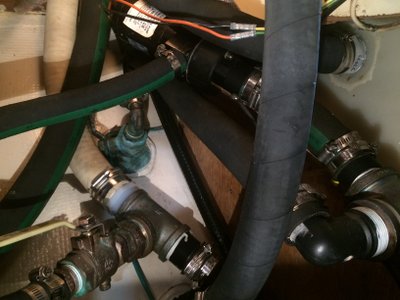 Working on the macerator (the mechanism that pumps waste to sea)

We’ve spent weeks looking for a place to get a pump out because we need to replace the macerator and it seems that one or more hoses are blocked. I have a list of my own boat projects but Matt says he needs an assistant. I quickly review our marriage vows in my head [in sickness and in health, yes; for richer or for poorer, yes (definitely poorer now); but there was never any vow about this kind of work]. We are taking all possible precautions … laying rags and a work towel over everything, buckets at the ready … everything but wearing hazmat suits (although I briefly consider donning the thermal protective gear). Matt is about to disconnect one of the waste hoses. I quickly stop him and say he might want to put a rag over his face in case … you know. He declines and says that he’s taken his glasses off. 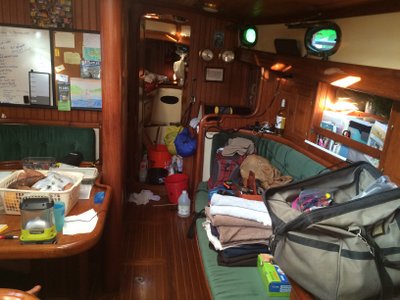 The cabin is a wreck when we work on projects

Hmmm… isn’t this a situation where you’d rather be wearing them? I think to myself. I know we’ve emptied the tank and run water through it during the pump out but anxiety is still rather high (particularly because of the potential blocked hose).  I briefly wonder if everything is going to explode in our faces (and then wonder if I would actually post that as a unique holiday photo). Mercifully, although we are hot and sweaty, the entire project ends up being rather uneventful.

At some point during the day, Matt and I head to the marina to check for supplies (and to walk through the air-conditioned store). On the way back down the dock, we pass a tall distinguished looking man in white linen pants and shirt. He looks very familiar; his gravelly voice confirms his identity. When we are a few feet away, I turn to Matt and say, “Was that …?” “Yes,” Matt replies as we continue walking. It was Morgan Freeman. He has his boat on our dock and is just a few slips over. Apparently he loves Virgin Gorda and has been coming here for the past decade. Since we’re neighbors, I briefly wonder if he’ll invite us over for a drink. Probably not.