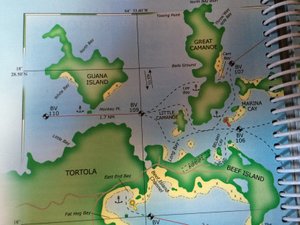 After Christmas we visit The Baths again and then leave Virgin Gorda. On the following days, we visit Camanoe Island, Guana Island and Trellis Bay (where Aragorn has his studio). Trellis Bay has bars and there will be a huge New Year’s Eve party with music blasting until the wee hours. We decide to go somewhere quiet. Where that will be is unclear. We’ve changed our minds about 10 times but have a list of places plus two back-ups in case the anchorages are full.

Some of Aragorn’s art

We go around to the south side of Beef Island and into a bay Matt wants to explore. It is not listed in any guidebook because, although it’s a large area of water, it’s shallow and there are two reefs blocking it. I know it’s a good sign whenever Matt says, “I think we can do this.” He decides to go for it and we inch our way in. There is only one sandy spot where we can anchor and it is just deep enough. It’s beautiful and quiet. There is literally nothing on this side of the island. After anchoring, the boys and I get in the kayak to explore. We head to the reef but there is no sandy spot to get out and we don’t want to disturb the coral. We head to shore and climb up some rocks. There is only a bit of sand

Kayaking in Bluff Bay off of Whale Rock, Beef Island

before the vegetation starts which means it’s full of tiny biting flies. The boys start yelling and want to head back to the boat for a swim instead. After swimming, I’m on the deck taking a bucket bath. Because there is no room for any other boat, I haven’t hung up towels or set up the cockpit cushions for privacy. As I bathe, I’m luxuriating in the fact that we are the only humans around. I’ve just finished this thought when I glance toward the beach. Three hikers are standing there looking at the boat. Great, just great, I think. Oh well. The next time I look at the beach, they are gone. Was it the view? I tell Matt and he laughs.

We sit up on deck after the boys are in bed, looking at the moon and talking. Really talking. For all the time we spend together, you’d think there is more opportunity for such conversations but there generally isn’t. Except for the moon and stars, the only other light is the one window of a tiny house on the other side of the bay. The sound of the waves breaking on the reef is incredibly soothing and, although it’s windy, we are well-protected from any swells. It’s exactly the peace and quiet we’ve been looking for. We could not have planned a better New Year’s Eve. Happy New Year!