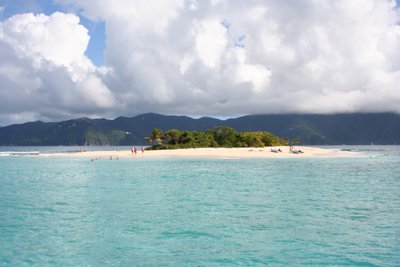 When flipping through the guidebook, Joshua saw a picture of a gorgeous tiny island, showed it to Matt and said he’d like to go there. It is called Sandy Spit and is right near Green Cay of Jost Van Dyke. It is picture-perfect – one of those places you see on a postcard and say “Is that real?” On Thursday, we anchor right off the island as a sting ray glides by. We go ashore and the boys 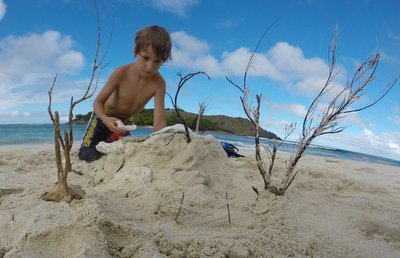 A beach house for fairies. Check out the hammock in the foreground.

build fairy beach houses on the island. We meet two couples traveling together from, of all places, Cleveland! It’s fun to spend some time talking with them. We decide to stay overnight although it’s super rolly. Matt and I don’t get much sleep but I don’t regret anchoring here because this island is so gorgeous and rare. 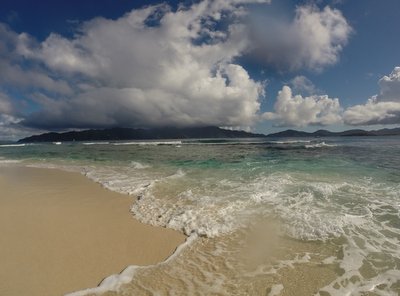 On Friday morning the boys swim back to the island in the morning to play and then we move the boat to a Cay off of Little Jost Van Dyke. Just as we are about the drop the anchor, a huge sea turtle swims underneath.

We are almost out of water so, although we haven’t spent that much time exploring Jost, we can only stay one more night before heading back 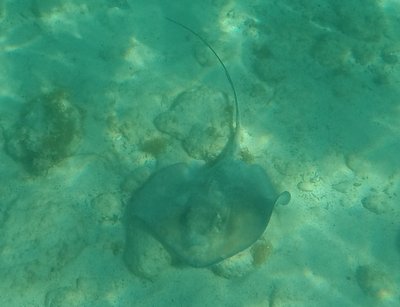 Sting ray 6 feet below me

to the US side for good. Matt and I nap at quiet time to make up for the lack of sleep last night. Then we dinghy in and hike to the Bubbly Pool – a place where the water from the ocean pours in through a cut in the rocks. We get back to the boat and Malachi says he wants to go swimming. But then we see 4 creatures swimming around under the boat. They are 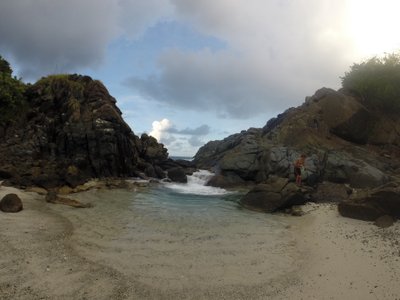 about 3-4 feet long. “Are those sharks?” I ask. “They kind of look like it,” Matt says. “They look rather …” predatory is the word he is searching for but Joshua supplies sharky. He’s right – they move just like sharks. What does one do around sharks? I immediately stick my arm under the water to try and capture them on the GoPro. Malachi wants to jump in and see them. Matt says no so he puts his snorkel mask on, leans all the way over the 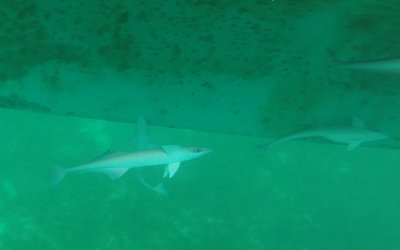 Sharks? We later figure out they are remoras

dinghy edge, and sticks his head underwater. Joshua is concerned he’ll get eaten. Matt looks at the two of us and says, “I’m staying in the dinghy until the two of you are back on the boat because I don’t trust you not to do anything stupid.” It reminds me of our rock climbing adventure on Peter Island. We had 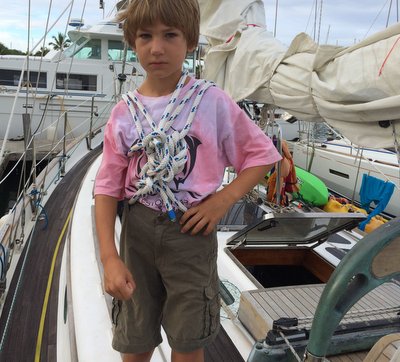 Malachi doesn’t want to wear a hat on our hike because “I don’t want to look dumb.” Oh, ok. I can see how the hat might interfere with the current look you’ve got going on.

already climbed a good way up and Malachi wanted to go all the way to the top. I was all for it and had the idea we could sit on the edge and hang our feet over and look at the waves crashing on the rocks 150 feet. Before I could share this, Matt bursts out with “No, no, NO! Am I the only one here thinking about safety?” I’d like to think he was addressing the boys, but maybe not. On Saturday morning, we head to Great Harbour on Jost to check out at 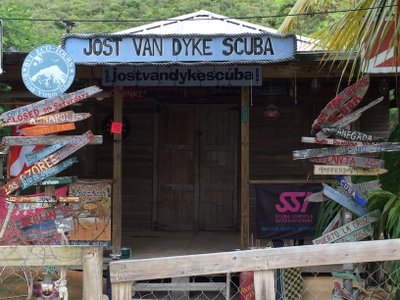 customs. Our time in the BVI has come to an end.