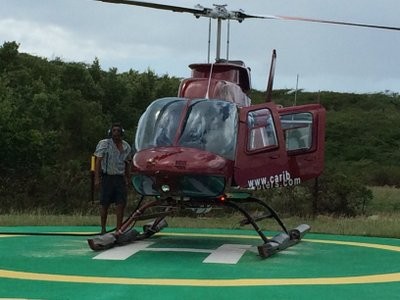 Our chariot to Montserrat

We decided on this volcano because, if the boys aren’t impressed with it, they will at least be enraptured by the helicopter ride. The other alternative would have been La Soufriere (on St. Vincent) which Matt and I hiked up in 2004. The elevation is 4,000 feet and we weren’t sure how the boys would do on the strenuous hike (although, frankly, they’re beginning to surpass us). It also required more complex travel arrangements from St. Thomas. 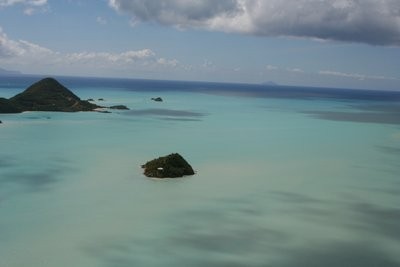 Homeschooling is easy this morning. After breakfast, Matt works with the boys to develop a report about the volcano. Some of what we learn: the Soufriere Hills volcano is an active one with many lava domes. After a long dormancy, it became active again in 1995 and has had periodic eruptions ever since, making at least half of the island uninhabitable. In 1997, 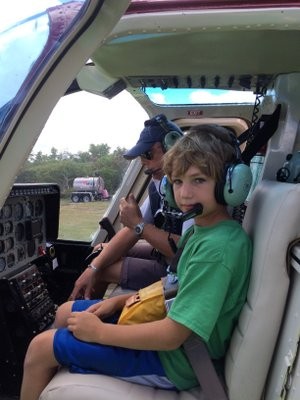 another eruption killed 19 people and destroyed the airport covering it completely with ash and mud. The capital, Plymouth, and at least 15 of its settlements were destroyed and another 10+ were evacuated permanently. The last explosions were as recent as 2008 and 2010. We have a 1 pm appointment at Caribbean Helicopters.

We get a taxi to the grocery store to pick up things for lunch and then walk another ½ hour to where we think the helicopter place is located. We eat lunch on their back patio and then go into a room for a safety briefing and video. We all have to wear a small inflatable life jacket and they go over the headphones and how to speak to the pilot. Malachi 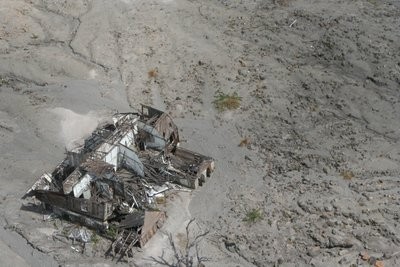 sits in front with the pilot while Joshua rides behind, facing Matt and me. As we are strapped in, I ask the attendant who will fly the helicopter if the pilot has a heart attack. He just grins at me. We take off, going immediately upward. I can tell Joshua is fascinated by the difference in take off between an airplane and a helicopter. We see more of Antigua by air 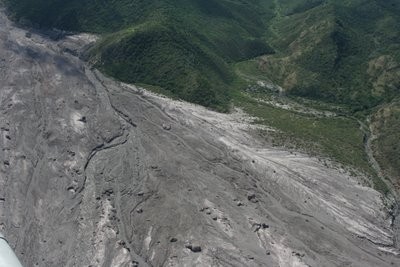 The site of the original airport

and then cross the 30 miles to the island of Montserrat going 130 mph. I love flying but helicopters take it to a new level (my only other helicopter flight was of the Grand Canyon). The water from above is spectacular and so clear I can see geographic formations on the bottom of it. We get close to Montserrat and the pilot talks about the devastation from the volcano – a clear contrast between the 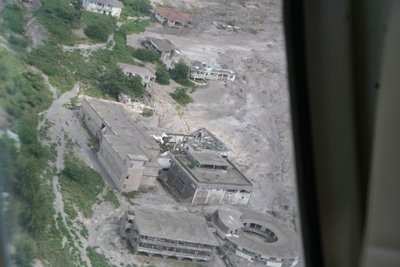 lush green and the ash. We fly over the edge of the island, which the volcanic matter 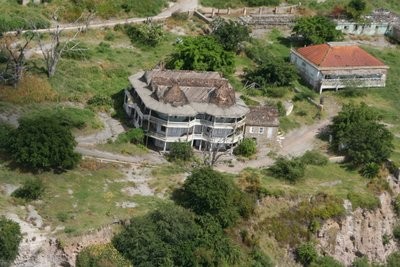 extended further out into the ocean; the abandoned settlements; the wasteland where the airport used to be; and up near the top where we can see steam and sulphur gas coming out of the volcano. The windows are open so we can smell it and also take photos. It’s incredible. After the tour, we head 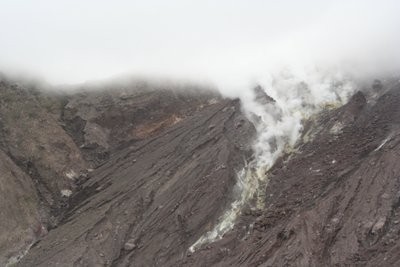 The steam and sulfur gas rising up from the volcano

back to Antigua. On the way, Matt sees something large below the water surface. The pilot circles back around and Matt and Joshua think they see a large shark down below. We arrive back at the landing pad and lower down. We get out as the blades are still whirling and run off the pad. 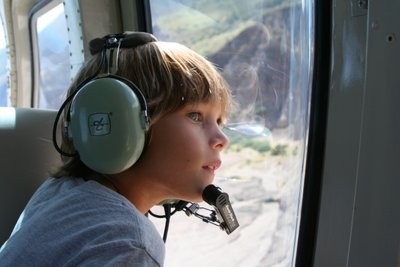 Once we get to where it’s quiet, Malachi puts his hand on my arm. I can’t wait to hear what he’s going to say about the experience. “Can I have some of those granola bars now?” he asks. I start laughing. That’s the thing about kids – always exactly in this moment. 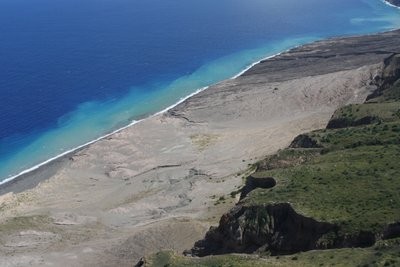 New land extending beyond the cliffs, where the original island ended