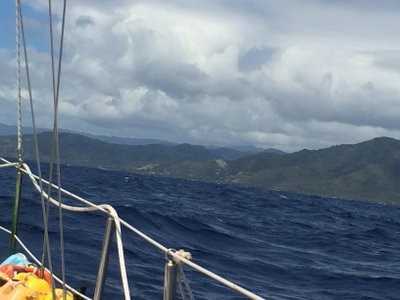 The southern coast of Puerto Rico

On Wednesday, we wake up at 5 am to get going and are out by 6 am. It is a LONG sail, mostly because of the constant motion. The winds start off at 25-30 knots with 6-8 foot seas. The winds slow to 18-25 knots in the afternoon but the swells stay high, with waves hitting us every 3-4 seconds and tilting us 30 degrees one way, 20 degrees the other. We see at least 50 flying fish through the course of the day. I always thought they just flew for a few feet but they can easily travel 100 yards in the air before landing back in the water. The day is getting away from us and we don’t 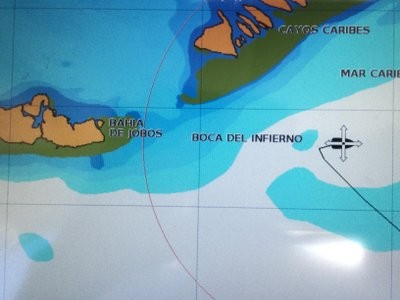 want to arrive in Salinas in the dark so we pull off to anchor in Bahia de Jobos. To enter, we go through Boca del Infierno (Hell’s Mouth) a narrow entry with reefs on both sides. A dolphin shows up just as we are assessing the best way to enter. It stays on our starboard side and, just before Matt decides to turn in, it begins leaping forward as if showing us the best path. Lest you think this is wishful thinking, there are 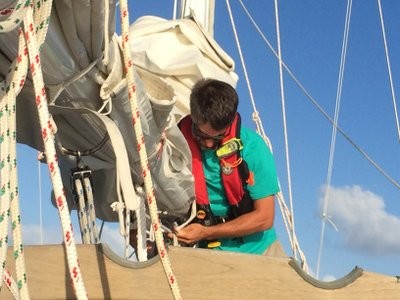 The captain pulling in the mainsail

plenty of nautical stories of helpful dolphins. Matt read one where three dolphins kept swimming in front of a boat and then veering off to the side. The captain checked his charts and saw he was not where he thought he was and was about to hit a reef. To date, this is the first and only dolphin we’ve seen in the Caribbean.

They eye each other, each unsure of what the other is doing there alone

We get to Salinas early Thursday morning; Matt sees a manatee as we drop the anchor. We start to walk into town but it’s far and it sounds like there isn’t much there. We don’t really have a plan but there are plenty of things I’d like to see. I tell Matt we should just get a car, pack an overnight bag and head somewhere. While Matt goes to arrange the car, the boys and I dinghy back to the boat to pack our bags. We hop in the car, still unsure of what 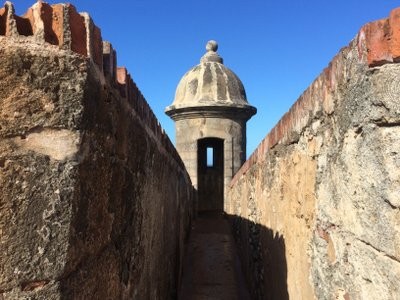 to see first. We drive north from Salinas and head to Old San Juan. We see the San Felipe del Morro Castle (which is actually a huge fortress) and then walk around town trying to find a place to stay for the night. Every hotel we stop in is booked (one clerk even calls 5 other hotels for us) so we decide to get dinner and figure it out later. After dinner, I find a place across the bridge in San Juan. It’s late and we are all exhausted. After breakfast

Friday morning, we head back to Old San Juan. The boys found an advertisement for The Pirate Gem Shop (it says ‘free gem’ on it) and they are determined to find it and collect the loot. It turns out to be more stone than gem. They decide they will buy a gem. The attendant takes pity when she finds out they are buying them with their own money (garnet 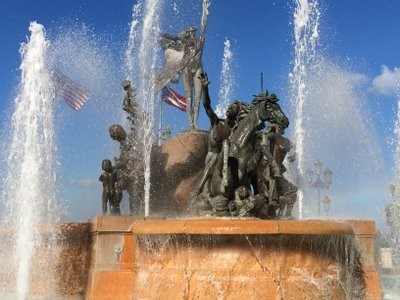 for Malachi, topaz for Joshua) and gives them a deal. They come in a tiny wood treasure chest and the boys are thrilled. While driving around looking for the gem shop, I almost get whiplash as I crane my neck to see if I saw what I think I saw. I did. A chocolate shop. How can we not visit a chocolate shop in a country that grows cocoa beans? It has a video (in Spanish) on the cacao process. I try 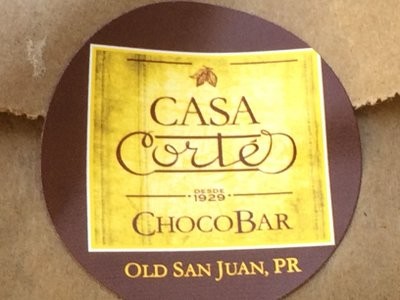 to translate but it’s just too fast. Matt says it would be cool to see a cacao plantation. I agree.