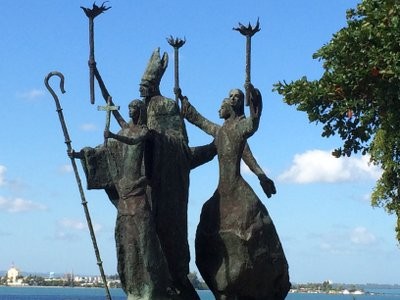 Old San Juan is lovely. I tell Matt that he and I should come back alone some year. I can imagine spending a week exploring this historic city more slowly –seeing the old buildings, sitting at outdoor cafes, wandering along the stone paseos above the ocean, meandering through the art galleries, etc. That, however, is not our pace at the moment. After seeing a little more (La Fortaleza, the Cathedral, Ponce de Leon’s family residence, various statues and fountains), we leave Old San Juan and head east on the north coast toward Arecibo where we were advised to stop at La Cueva del Indo. What I was expecting was a cave with some petroglyphs. What we got was much, much more. 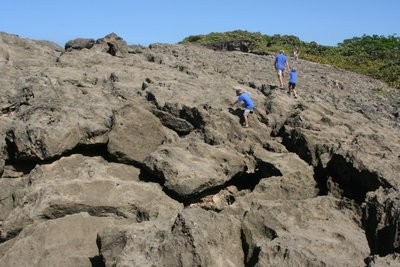 Hiking up to the Indian Cave

It is one of those amazing places that keeps getting better. We hike up a vast expanse of volcanic rock at the edge of the Atlantic to see an opening with a ladder that descends 30 feet below. We climb down and see petroglyphs made by the Tainos (the indigenous people of PR) in a large cave with 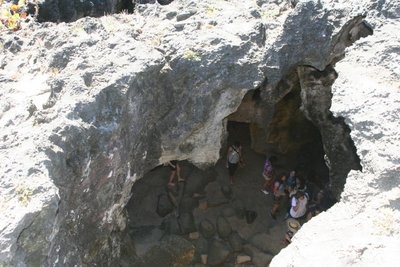 The view from above down into the cave

multiple rooms and openings and water. After exploring for a while, we climb out, walk along the edge of the volcanic rock and come across varying types of vistas – each new and beautiful in a different way. There are a series of stone archways above the ocean, pools of water, vast expanses of flat

Malachi near some of the petroglyphs

rock at the water line, beautiful beaches. My camera can’t even capture all there is to see within one image. We spend more time than planned because it’s not something to rush. We then head south-central into the mountains to the Arecibo Observatory (the largest radio-telescope in the world). Unfortunately we get there at 4:25 pm (it closed at 4 pm) and can’t get in. Matt is disappointed – the engineer in him really wanted to see it. On the drive back, he races through the hairpin turns that are carved through the mountains. I’m getting slightly carsick but don’t say anything because I can see how much fun he’s having (and, frankly, I’d be doing the same James Bond-type driving). In the evening, Matt is meeting up with our Annapolis friend Jim to talk about making the upcoming overnight passages together. 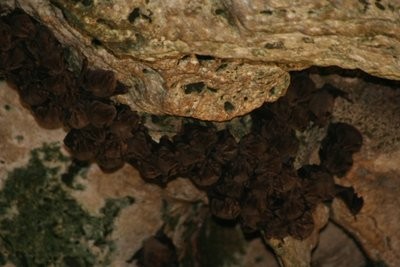 Clusters of bats hang, and occasionally fly, in the cave

The next morning we go to some hot springs between Salinas and Ponce. After that, I had wanted to get a tour of a coffee plantation I found, but no one ever answers the phone. We decide to take a chance and drive up. On the way, we go through Ponce and happen to see the striped firehouse a Cleveland friend told us about. It’s such a cute town square that we park and get out to walk around. 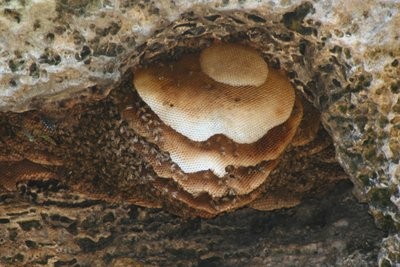 Beehives in the cave

We see a sign for the Serralles Castle and head up that way. It looks beautiful but we skip the tour to get to the coffee plantation. We arrive and the guard says we need to make a reservation. I show him the numbers I called on their website and he gives me a new one and says to call in the morning. That evening,

we provision and arrive back to the boat loaded with bags. We leave the non-perishables in the car and dinghy back to the boat with fridge stuff. It’s late, everyone is toast and the boys need to get to bed. We are supposed to leave tomorrow but it looks like it will be Monday instead. 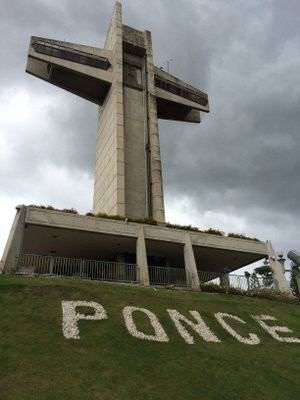