When we are not assuming our role as parents (i.e., someone else has the boys), Matt refers to us as ‘the original two.” Since the boys were with Nannie in Baltimore, ‘the original two’ had a little bit of breathing space. Although we both had arms-length ‘to do’ lists, we just collapsed for about an hour after they left. Later, after working all day, we went to Sears to get a crimper and then out for dinner. It is amazing how much fun we have just doing an errand together – it was nice to have a chance to really talk while we were both still somewhat awake. During dinner, Matt said that he really hoped we would be able to relax and not stay this stressed and pressured once we actually get going and permanently leave the marina. Although I didn’t voice anything at the moment, I was thinking “I’m actually having a lot of fun just living in this very different way – and I think the boys are too.” Later, at a more opportune moment, I did say something along these lines. Matt looked at me sternly and said, “That is because you have NO idea of what could happen and what it would be like in a hurricane.” What flashed to mind was one of our early days on the boat. I saw a mesh bag with cone-shaped wood dowels hanging in Joshua’s berth and said quizzically, “What are those for?”

[note: look at photo below and see if you can figure it out]. 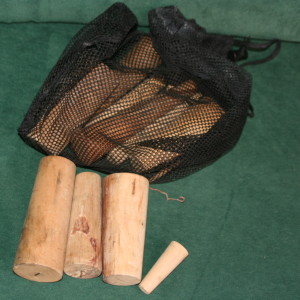 Matt replied, “That is what you would jam into a seacock if it malfunctioned or if a hose burst to stop the boat from filling up with water so that it doesn’t sink.” I stared at him wide-eyed and murmured, “Hmm … good to know.”

[Note: seacocks are below-the-water-line holes in the boat that are attached to hoses or other things (e.g., bilge pump) that outflow external to the boat].