We get the boys back from Nannie tomorrow at lunch. Matt has been working on the engine trying to get the smell out (the head finally doesn’t stink – yay!). If we go down to FL through the ICW (Intracoastal Waterway), which is the safest way to go, we will have to motor sail because of the narrow canal. This means we will be running the motor almost constantly. The fumes are unhealthy and Matt has already had several guys in to look at it and work on it. Nick came today and did some things and then Matt spent a few hours cleaning out some things (the alternators?). It is pouring rain today and Nick said it is critical the engine doesn’t get wet. The engine is located below the ladder at the entrance to the boat. 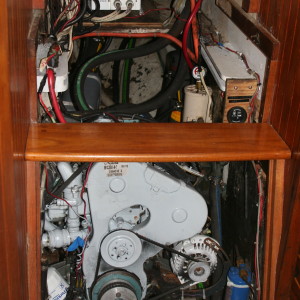 Some water was coming in above the engine and Matt was trying to figure out where it was coming from. He followed a rivulet of water and found some decayed wood. “What color are termites?” he yelled suddenly. “Are they white?!” “I don’t know. Maybe they’re brown?” I said (while really hoping they are brown). He asked me to find a picture of them on his phone. My heart stops – it kills me to tell him they are white. He then said he saw them around the toilet when he pulled out a piece of wood. He looked at me and said, “I really need some successes. This boat needs to start giving back. If there are termites, I think I’m just going to start crying. And then I’m going to sue the owner.” It was late, we hadn’t had dinner and I could see he was dispirited and exhausted. “We’re not going there right now” I told him. “It makes no sense to entertain something so negative if we don’t even have enough information to make an accurate assessment.” (post script: we spoke to someone else about them and it sounds like they are fine – just standard bugs. Which, as I write this, I almost start laughing. How blasé I have become about bugs … in my domicile! P.P.S. Thankfully, we don’t see any more of them).