Matt suggested that we do an overnight trip. We were both a little skittish and not feeling completely ready – but that’s probably an indication that it’s time to take action. We sailed from Annapolis to Baltimore on Sunday (10/6). There was very little wind for much of the day – a number of other boats passed us and gave us a thumbs-up as they motor-sailed by (Matt is a purist and does not motor sail when there is no wind. As evidence, for part of our 3-week honeymoon we chartered a sailboat in Spain for a week. There was no wind on the way back from that trip so we just floated for hours – playing cards and waiting for a breeze). On the way to Baltimore the wind picked up in the afternoon and we arrived to an absolutely gorgeous sunset. We called Matt’s sister as a surprise on the way in and she and her husband and pup ran down to the water and took some photos of us sailing in. We docked at dusk and celebrated with a great dinner at the Rusty Scupper. The next day was exactly why we are doing this – we had breakfast out and then spent the day at the National Aquarium which was just a short walk from the marina. It was absolutely incredible – all of us gawking as a 500-pound sea turtle swam past. There were lots of different sharks, a dolphin show, amazing kinds of jellyfish, Amazon tree frogs that have colors like nothing I’ve ever seen, and sea horses (which were mating – so that’s an interesting homeschool lesson). We also saw an archerfish, so named because it shot an arc of water at a cricket on a twig two feet above the tank. The cricket plunged into the water and became lunch for the archerfish. I nudged Malachi and said, “How do you like homeschooling?” “Awesome!” he said. 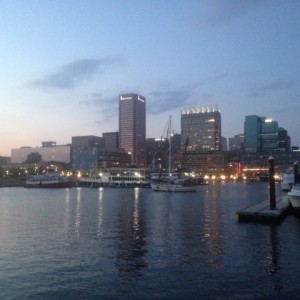 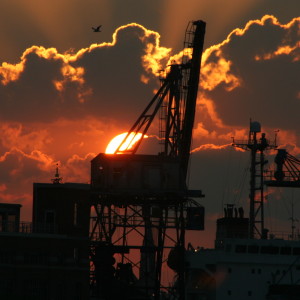 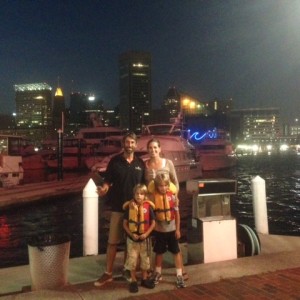 The weather was sketchy, with a hurricane on the horizon so we left on Tuesday instead of Wednesday. Everyone tells us the cardinal rule of sailing is to be flexible and not have a schedule. We went to breakfast at Ms. Shirley’s and had a ‘cultural’ moment. The restaurant was playing great music and we talked to the boys about the various artists, one of whom was Elvis Presley. After telling them about his music and what little I knew of his life, they both looked at me with a vague frown. One of them asked, “His name was Elmo?” “Elmo Pretzel?” the other further clarified.