Today we crossed the border from MD to VA. It is really cool to see the boat actually cross the state line on the chart plotter. 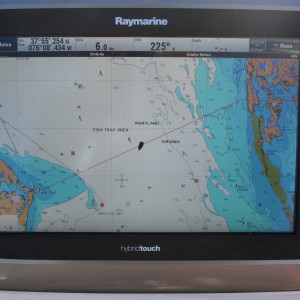 We saw a number of fighter jets during the sail. One of them circled us a few times and banked in front of us by only 500 feet. The roar was deafening and it was thrilling to watch. Matt gave the pilot a thumbs-up. He himself was in the Corps of Cadets at Virginia Tech, intending to be an air force officer. After being one of only 14 cadets out of 122 to make it through the training, they discovered he had a heart condition during his physical at Langley Air Force Base which disqualified him from service.

Sailing is great today. The boys play Legos down below and Matt and I eat lunch with our legs hanging over the port side of the boat. There is a feeling of freedom, the vastness of the water, and infinite possibility. At one point, Matt exclaims, “These two days of sailing have been worth all of the work the past few months. This is awesome!”

We arrive in Reedville, VA after dark and anchor in a cove. After being on the water for 12 hours without seeing anyone, pulling into a town is slightly shocking. It feels like seeing one of those tiny holiday villages all lit up.