Matt and I went over to the boat this morning to meet up with the diver and the mechanic. The diver got all geared up, hooked up his oxygen and spent about 45 minutes under the boat. 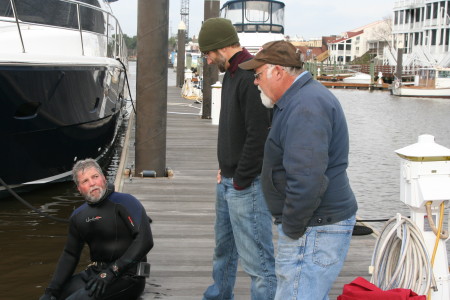 The diver, Ted, tightened a few things on the prop but didn’t see anything that would be making the vibration and noises. After he left, the mechanic wanted to take the boat out again. Matt wanted me to come along and help (I’m hoping this is a sign I’m actually becoming useful). I didn’t really want to go out because it was pretty cold and my hair was still wet from a shower. Also, after so many weeks in a comfortable place, I had visions of me hanging onto the dock with Matt trying to pry me off once it is time to get going again. Thankfully, as soon as we were off the dock I was filled with that extraordinary sense of freedom again. There is just something about being out on the water and off of land. We took the boat out beyond the marinas and did a few runs at various rpm’s of the engine to check the speed. The vibration and unexplained noise persisted (photo of our new baby below – perhaps it is just a bad case of colic?). 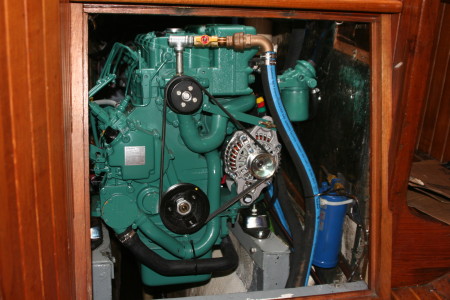 After a bit, we decided to take her back in. We did a fly-by near the dock and then Matt turned around to take her in and dock her. As he shifted into forward, there were several loud bangs and all of us yelled “What was that?” (with some yelling perhaps more colorfully than others). Particularly concerning was the fact that the mechanic had the same question. Matt quickly shifted into neutral and tried to get some steerage. We were on a backward collision course with a boat tied to a mooring ball. I was hanging off the stern thinking I would push the boat away with my feet if we got too close. Just as that was about to happen, the mechanic did something and Matt was able to put it back into forward. We finally docked – a bit shaken and no closer to understanding what is going on with the engine.