Matt and I had New Year’s Eve alone because the boys were still down in Charleston with my parents. As we hung out in the blissfully quiet condo, Matt said, “I think I’m really going to enjoy it when the boys go to college.” We went out to dinner and watched a movie – and were in bed before midnight.

On New Year’s Day, we headed down to Charleston. New Year’s Day is also Malachi’s birthday. He was the first baby born that year in our town and so we ended up on the front page of the local newspaper (some consolation for 26 hours of natural labor on New Year’s Eve). For the first few years after his birth, we had a New Year’s Day party that also served as his birthday. We invited all of our other exhausted new parent friends who also did nothing on New Year’s Eve. Along with birthday cake, we would have a New Year’s countdown with champagne – all of us shouting “10 … 9 … 8 …….. 2… 1… Happy New Year’s!” at noon on New Year’s Day. This year, we took Malachi to PF Chang’s for lunch (which he loves) and celebrated his 8th birthday with a piece of their ‘great wall of chocolate’ cake. It was extra special to celebrate with his grandparents and surreal to think he will soon enter double digits. He was inundated with Lego gifts which kept him busy for the rest of the day. 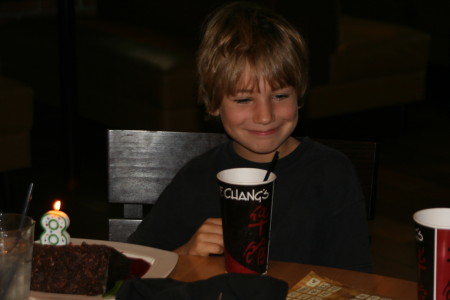