Today we went down to the North Charleston and American LaFrance Fire  Museum and Educational Center. They had an incredible number of fire trucks, some dating back over 150 years. The best part was the fire truck that simulated an actual drive to an emergency. The boys climbed into the front seat where they received a ‘call’ about an emergency. The driver (Joshua) was then digitally instructed to turn on the engine. After pressing a button to do this, the whole thing started shaking as if the engine were really running. The side windows were blacked out and the front windshield was essentially a movie screen. The simulated fire department door began raising and the fire truck began pulling out on the street. The whole thing was so real that Joshua, who occasionally threatens to drive our car, tried to scramble down from the cab yelling that he didn’t know how to drive. I explained that it wasn’t real and he then ‘drove’ through the town, onto the highway and arrived at the emergency site. Malachi also had a turn – with Joshua shouting advice about things he was about to hit. As I told Matt, the 6-year old is a far better driver. 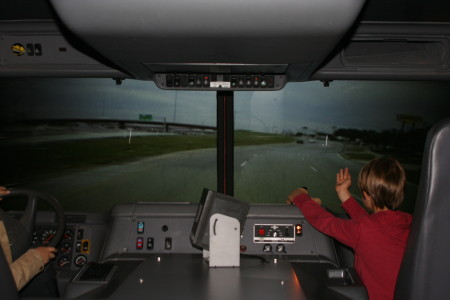 On the way home, we stopped at Whole Foods to get some groceries. They were sponsoring the nonprofit Center for Birds of Prey that day and had at least four raptors on display. There is nothing cooler than coming face-to-beak with live birds (owl, hawks, falcons) while going grocery shopping. At dinner, Matt told us that there was some clarity on the boat issue. They checked the coupling between the engine and the prop shaft. The machine shop had not drilled it correctly so it was not ‘true’ and was throwing everything off – it may be causing the vibration and grinding. 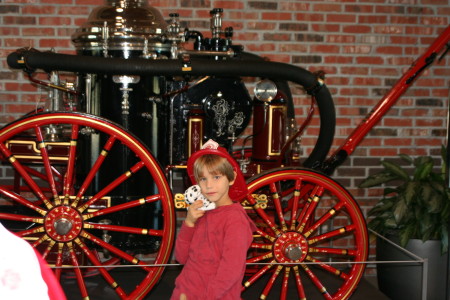