I sometimes see people walking up the dock and wonder, “What the hell happened to you?” They are completely disheveled, have rumpled and stained clothing, hair looking like it was caught in a tornado, and a very dazed expression on their faces. I finally get it. We ‘headed out’ today, which means we took the ocean path instead of staying in the safety of the ICW. It’s been getting hot down here – several days of 95-degree weather convinced us it is time to head north. We left Charleston, SC at 6:30 am and arrived at 9:15 pm into Georgetown, SC (site of our historic engine breakdown). [The sunrise in Charleston as we head out]

[Although only an hour’s drive north of Charleston, it would have taken 3 days to get here in the ICW]. After docking in the dark with no assistance, Matt hooks up the hose to wash the vomit off the deck. Yes, it was that kind of day (you can thank me later that I didn’t take and post a picture of what had been Joshua’s lunch). Malachi had better aim and was able to miss the deck. Despite sea bands, homeopathic oil behind the ears, a ginger capsule in the belly, and ginger gum, everyone except The Captain felt queasy. Apparently we haven’t earned our sea legs yet. The wind was stronger than expected, 15-25 knots with 3-7 foot waves hitting us every 6 seconds. Despite stowing items, we could hear things crashing out down below. Poor Malachi spent almost the entire day huddled in a ball, either on deck or in his berth. Thankfully, he slept for hours at a time so he was not completely conscious of his misery.

To say the day was long does not begin to describe it although, similar to childbirth, you look back on it with a kind of pride and sense of accomplishment. Matt did a stellar job. Although we joke that he gets upset about small stuff [incremental stamp price increases, contiguous highways with similar numbers, e.g., route 86 near route 88 (for which I’ve often told him he should run for public office on the platform ‘minutia matters’)], he is at his best when things get really hairy. In those moments, he is the quintessential leader and maintains a cool calm that is contagious. The water out there is beautiful, neither blue nor green but a fantastic deep teal color. The incredible power of the waves and the ocean is humbling – particularly when imagining those who have faced severe weather. In that light, today was nothing.

[We were rewarded the next day with our first marina sighting of an alligator. I tell the boys they are just the right size to be a delicious snack] 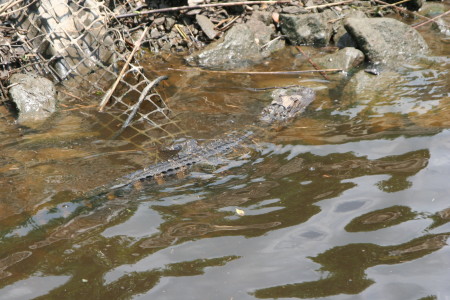