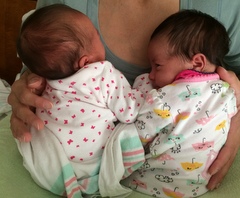 Although I want to help my sister more, I know our time in NH is coming to a close. She will figure things out for herself. Before I leave, I make my sister a collage and secretly leave it in her room. It has a perfect concept for a Type A: Wabi-sabi is a Japanese world view based on the acceptance of transience and imperfection. The quotation says “Wabi-sabi nurtures all that is authentic by acknowledging three simple realities: Nothing lasts, nothing is finished, and nothing is perfect.” 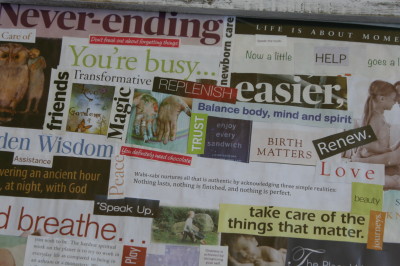 For those of you who know our personal drama, you are probably wondering how we dealt with all this. [For those of you coming late to the party (i.e., our life), Joshua had an identical twin brother, Caleb. Both boys were healthy, full-term and 6.5 lbs each. There was a freak incident during labor in which Caleb lost most of his blood. They transfused him but he was already brain dead. He died in our arms 30 hours later]. I can honestly say that being with my sister and her babies was fine – better than fine. There was a moment of clarity when I was driving around doing errands and had a chance to reflect. 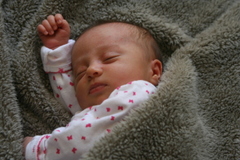 What I realized is that I felt great and was perfectly present in the current experience – being happy for my sister, enjoying these adorable little babies, sharing in her experience with her babies. It was amazing to me that none of our stuff even came up.

This was a relief because, when I found out the news in March, I was not ok. I thought I was but then, in the midst of sending her an excited congratulatory text, I completely lost it. Waves of grief washed over me. For two days. I remember feeling that the weather perfectly reflected how I felt. It was stormy, a little violent and angry, but mostly mournful – the wind howling and wailing in a way I wanted to but couldn’t. Grief is exhausting … I decided to sit that one out and let the Universe express it for me. Again? I thought. Haven’t I moved further than this? After 6 ½ years, am I still in this same sad space?

Now, it seems, I am not. Somehow a circle (or perhaps a cycle) has been completed. I am beyond ok.