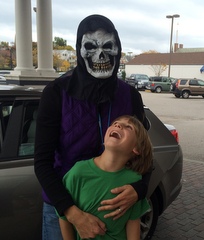 After doing final errands in Fairhaven, MA we head to Newport, RI. After two tries, we find a place that still has a few pumpkins. Since the boys now have wetsuits, they will be ninja scuba divers this year (ninja sailors last year). They want to be scary so I tell them we’ll buy Halloween make-up. I quickly stop at Rite-Aid and let them wait in the car. Because it’s Halloween and everything is 50% off, I also buy a scary mask. I come back outside, slip unnoticed behind the car, and pull the mask over my head. I sneak around to Joshua’s side, pound on the window and peer in. His eyes go wide in fright and I see a deep intake of breath. When there’s no exhale and I think he might have stopped breathing, I quickly pull off the mask. Both boys look hugely relieved and we all start laughing.

We arrive in Newport around 1 pm. There is a dinner at 5 pm for all sailing vessels 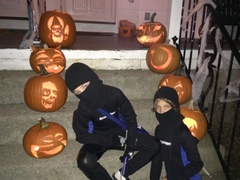 participating in the rally. We attend with Matt but leave early to go trick-or-treating. I ask Matt about the Fairhaven-Newport trip. He is the only one who wanted to sail so they ended up motoring. He felt it was a chance for the captain to put the crew through its paces and was disappointed at the lack of leadership. The decision was made to make the upcoming passage without the fourth crew member. It’s not personal – but it still feels awful. The situation could have been avoided if due diligence (i.e., finding out ages) had been done right. Matt is in a tough situation. He has natural skills as a sailor but, because he has less experience, he made the ‘smart and safe’ decision to hire a formal captain. Yet he is chafing at certain incidents and how things are being done (or not done). There are a few tough conversations about what he expects. The essence of this passage is that it is a new team (with big personalities) trying to accomplish a difficult task under extreme conditions (bad weather, sleep deprivation, small boat and lots of water). I tell Matt the sailing aspect of the trip will be the least of it – it’s the interpersonal dynamics that will likely be the most challenging. Whether the voyage turns out to be a drama or a comedy will mostly depend on whether you are on or off the boat. [Unfortunately, Matt says ‘no’ when I ask if I can mount a web cam in the cabin].