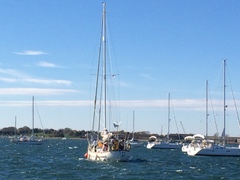 Matt and the crew head out to Bermuda

The crew spends Saturday finishing up final boat projects; the boys and I tour some of the Newport mansions. They are stunning and have a great historical audio tour which keeps the boys engaged (and lets me check ‘boat school’ off my list). It’s rainy and the wind is howling. On Sunday, Matt drives the 78-year-old crew member to the airport to catch a flight home. I’m still disappointed because his personality brought some balance to the crew. We help the crew run errands and get provisions for the passage to Bermuda. 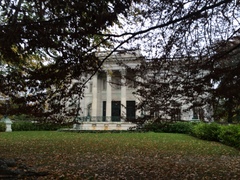 The boys and I have left some new books, some chocolate and a packet of mail (notes, pictures) from us, family and friends for Matt while we’re out of touch with him. He stays in the hotel with us the few nights before he leaves but sleeps restlessly. The last night he doesn’t sleep at all but I sense that his anxiety has turned to excitement. There is a point where you look it in the eye [whatever it may be] and just say “Bring it.” He is at that point. The boat is scheduled to leave Monday morning (11/3) at 8 am.

Matt and the crew

The boys and I show up on the dock at 7:15 am but the crew isn’t ready to go. There is a boat ahead of us on the docks and we are blocked in until they leave. The winds are 38 knots so no one is bothered by the delay. At 11 am, our crew is finally ready to pull out. Four guys help with lines to move the boat down the dock. When they get to the end, Matt will pivot the boat off the stern line to swing the bow around and head out. I’m trying to take pictures and keep the boys from getting knocked into the water. It’s not until the boat is at the end of the dock and turning around that I realize Matt’s not getting back on the dock. Of course he’s not. How many times have we done this together? Except that this time I’m not jumping back on the boat. I’m the one left behind on the dock. My eyes fill up as I grasp the fact that I didn’t even get to hug him goodbye. About 20 yards out, Matt turns and shouts back “I love you” to each of us, naming us in turn. I can tell he is doing it so that is the last thing we remember, if it comes to that. Now I really start crying. The boys look at me alarmed. I lose it on and off for the next few hours but assure the boys that I’m just sad and I’ll be ok. We were supposed to be out of the hotel by 11 am so we race back to pack up. Our week of being boat groupies has come to an end.

The boys and I didn’t have a firm plan but, just as I was feeling very homeless, my sister texted saying she could use some help with the babies. We slowly make our way back up to New Hampshire, stopping in Amherst, MA on the way. The hotel has a pool so the boys can swim and we tour the Eric Carle Museum.

The first night I wake up at 1 am and again at 4 am and check my phone to see the boat’s progress. On Tuesday morning (11/4), the satellite view of the SPOT tracker shows the boat passing over the Continental shelf. I look up the details to share with the boys. The shelf occurs at about 460 feet, after which point it drops off to a depth of 1.5-4 miles deep. All I can think is What the hell lives down there?

[Matt later communicates that the wind was 51 knots and seas were 12 feet on departure day].