Matt has sent me a satellite communication about a time to talk. I can send free texts to the sat phone if they are 35 characters or less. I suggest Sunday night at 9 pm, after all the kids are in bed. It’s 8:40 pm and then 8:50. I have butterflies wondering if he will call. He calls at 9:01 but the call disconnects. He calls back and says he can’t call back again because it’s so expensive. We get disconnected three more times. It’s not a long conversation but he sounds great. Although I don’t have too much detail, things have turned out as I predicted … the interpersonal dynamics are more challenging than anything else. He is with two blusterous people who, to put it delicately, may overrate their abilities. It is hard for people like this to receive any feedback or to listen very well. Matt knows his stuff. Technically, he is a damn good sailor. Two examples. At one point Matt is watching storm clouds on the horizon and checking the weather. He tells the captain he thinks they should bring in the sails. The captain says they can leave them up for another hour. Five minutes later, Matt insists on bringing them down. Twenty minutes later, the winds are 35 knots and they are in the thick of the storm. The second is on the arrival to Bermuda. The captain advises Matt (who had already looked at the charts) on how to approach the entry. Matt tells the captain that the markers he is looking at are not what he thinks they are. The captain was aiming the boat right into the shoals. As Matt put it, it’s a little like being with Foghorn Leghorn (the loud and arrogant rooster cartoon character with a southern accent who is always trying to give advice to his grandson, who is eons beyond Foghorn in terms of skill and whom he refers to as ‘boy’). What is even funnier is that, after I had sent the crew some photos of the boat departing, the captain sent me an email and said I didn’t have to worry about anything and that he would “deliver the boy and the boat safely to the BVIs.” Matt and the crew leave Bermuda on Thursday (11/13). ETA to the Virgin Islands is 8-12 days. 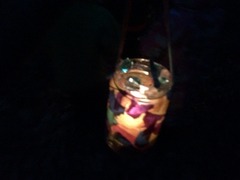 The boys and I are still in NH with my sister. We are invited to go on their cousin’s annual school ‘lantern walk’ on Friday after sunset. On Thursday, the boys and I make home-made lanterns with the 3-year old. We glue colored kite paper on the outside of glass jars to make them look like stained glass. The inside has sand and a tea candle. Just for kicks, I glue some pieces of wood on the top of my jar and then we hang the lanterns from wooden sticks. The Waldorf school is a very ‘natural’ type of school (e.g., no plastic, no garish colors – mostly leaves, wood, etc. in the classrooms). I love the place – it’s all granola-y and half the parents wear clogs or Birkenstocks. The walk is supposed to start after sunset (about 4:45 pm) and my sister has instructed me that it is a silent and meditative walk. I instruct the boys accordingly and warn them about causing any commotion. There is a candle-lit path from the school parking lot, through the woods, and into a field. Before departing, we light everyone’s lantern. I realize I forgot to pull the wick up on my candle so I have to loosen the pieces of wood on top. I watch all the 5-7 year-olds traipse quietly through the woods ahead of me with their lanterns. My boys are in front of me and I’m the last one in a line of about 30 people. It’s a privilege to be part of this annual rite. I’m enjoying the silence and the evening while watching the line of slow-moving lanterns moving silently ahead of me along the path. Every so often, the stars are visible through the clouds. Joshua looks back to check on me. “Mom!” he yells. I look down and see that my pieces of wood have fallen into my lantern, flames are shooting out the top of it and licking at the string tying my lantern to the stick I’m holding. I shush him as I frantically try to blow out the flames without having my hair catch fire. I have the distinct feeling that he is disappointed in my behavior.