Our previous overnights have ranged from 120-140 miles. This third passage, going from the northeast coast of the Dominican Republic to the Turks & Caicos Islands (TCI), will be 170 miles (we are headed to Providenciales). We leave in the morning and the winds are coming from every direction at 8-12 knots. By noon they pick up from the east at 20-25 knots and we’re sailing steadily at 7-8 knots. At 3 pm, Matt goes down to get some sleep. The winds are 30-38 knots. We have a double-reefed main, the staysail is out and just a small bit of the jib. We’re going a solid 8 knots, sometimes up to 9.5 (Matt is being cautious because our theoretical hull speed is 8.5). It’s another wildly uncomfortable passage as the boat gets swung from side to side. The chart shows the water depth is 13,000 feet. Our depth meter only goes up to 3 digits; it just keeps blinking in confusion.            At some point, Matt checks the rudder post bolts that we tightened on a previous passage. The autohelm is bolted onto the sides of a piece of wood underneath the cockpit and Matt hears it creaking. He feels that, with the wind and the waves, there is too much pressure on the autohelm as it attemps to steer the boat through the waves. He says he will feel more comfortable if we steer by hand. Steering by hand all night? I groan inwardly but remember my personal vow to not complain about anything under these passages. Matt has enough pressure with gauging our course, weather, keeping the family safe, etc. The latter, in particular, weighs heavily on him.

Malachi starts feeling sick in the late afternoon. He throws up right before dinner. Today is the first day I resort to drugs and give him some Dramamine. I’m not sure it actually does any good. He feels better after vomiting and eventually eats dinner. I put the boys to bed at 7:30 pm, glad to just be a sailor rather than a parent-sailor. The reprieve is brief. Malachi comes up on deck right after he is put to bed and throws up again. Once he is settled, I put him back down to bed, hoping he’s in for the night.

Matt lifts up the cockpit hatch and, although we’ve been steering by hand, checks the rudder post and the autohelm again. It’s not good news. Matt tells me that the board holding the rudder post has cracks in it. “What does that mean?” I ask. “The rudder post could loosen and we could lose all ability to steer,” Matt says. “And then what?” I ask. “Worst case scenario is the top of the post works free and creates pressure where it comes in at the hull and we start taking on water,” he replies. “Really?” is the only thing I can think of to say. “Really,” Matt replies. There is no need to say anything else. I make sure the boys’ lifejackets are within grabbing distance, glance at the ditch bag and hope for the best. This new development adds additional tension as the gravity of the situation sinks in. It’s the first time I’m actually scared being out on the ocean and wonder if the end of this adventure will be a soggy one. At 9 pm Malachi surfaces with his black bucket and throws up again. We are rocking, it’s dark and he doesn’t have his life jacket on. I can’t do this, I think. I silently send a message to Matt’s dad asking him to watch over us. I put Malachi to bed again and rub his back for a while. When I come back up on deck, Matt says he saw a shooting star. Thankfully, once he is in bed again, Malachi stays asleep for the night.

Matt takes the first watch. I’m sleeping in the cabin and wake up to hear him swearing and muttering “This sucks! God, this sucks!” as a wave crashes over him on the deck. I get dressed in my foul weather jacket and go up to relieve him. He looks uncertain and asks if I’m up for it. I nod, he gives me an update and then goes down below to try and sleep. I take the helm. The winds are 30-35 knots with big waves that occasionally come over the side and soak me. As long as one accepts the fact that one is going to get wet, it’s not a big deal. Steering the boat feels like wrestling a wild horse and all of my sense are alive. The wind rushes through my hair and I feel the spray on my face and taste saltwater. The bright stars stand out in stark relief against the dark sky. The moon is still low and a deep yellow. I can hear the force of the wind in the sails and feel the water pounding against the boat. I’m steering by the compass but eventually pick the edge of a constellation so I don’t get sick (I briefly wonder if this counts as celestial navigation… probably not). I’m having a blast, being up here alone in the middle of the night. I can feel where the boat wants to be. They call it ‘finding the groove’ or ‘being in the slot’ when the boat is in that sweet spot. After a while, Matt groggily emerges to relieve me. “What are you doing?” I ask. “Go back to bed – I’m having fun.” He looks at me and shakes his head. “Geez, you’re tough,” he says. Not really. It’s just that it feels so wild and free up here that I want to whoop with joy. I feel so fully alive.

Eventually Matt takes over, and then we switch again. I see the moon travel across the sky. It sets at 5:15 am; at 6:00 am the sky starts to lighten. There has been no easing of wind or waves. Malachi is back on deck, holding his bucket, before 6:30 am. We still have at least 4-5 hours of travel left. At some point, Malachi throws up for the fourth time. I watch him as he lays on deck for hours in a miserable heap, refusing to eat or drink. There’s nothing I can do and it feels awful. At what point do you just say ‘enough’? I wonder. It reminds me of a difficult school situation he was in. At the time, I was conflicted about what to do and I shared this with my sister. She looked at me and said, “Well exactly how bad does it have to get before you decide to change the situation?” That question gave me absolute clarity and we made the change. It’s often much easier to make a change on someone else’s behalf than for ourselves. It can be easier to tolerate intolerable circumstances when it’s just our own sanity at stake.

We start heading north and now get no help from the winds. It’s late morning and Matt and I are so done with this passage. I’m no longer feeling wildly alive. We just want to get to a place of shelter and safety. We motor the last few hours because there is so little progress. Matt says he is making no commitments beyond arriving at this marina. We both agree that we need to seriously rethink our plans, particularly given how Malachi is doing. We are soaked from rain and waves and just want the trip to be over. Amidst absolutely gorgeous water, the channel markers into the marina are literally only a few hundred feet in front of us. In the sky beyond them, there is another front coming in. Matt says it’s unsafe to enter the channel and we’ll just have to wait it out. All I can think is, Oh hell, can’t we just chance it and get in there? He tells me to go down below so I don’t get wet. I look down at myself and back at him. There’s a point where you are so wet that it just doesn’t matter anymore. The rain pours down on us and the screaming winds, at one point, register at 54 knots. We realize the bimini is still up and catching the wind (it tore in an earlier storm but has since been repaired). Matt can’t take his hands off the wheel so I stand on the lazarettes and try and wrestle it in. As the wind and rain lash us, I start bellowing at the sky, “Ok, Ok! We get it! We’re done, we are DONE!” Have you ever noticed that, when you need to be doing something different in your life, the Universe will nudge you? 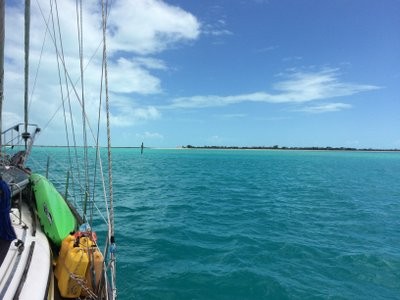 The water of Providenciales of the TCI is stunning.

Nudges might come in the form of a random stranger’s comment, a song lyric in the car, a bumper sticker or something you read, that gives you an answer to something with which you’ve been struggling. If you still refuse to acknowledge it, those gentle nudges can feel more like shoves – you lose your job or there’s an illness or some other major event (e.g., vomit and storms), that finally push you to do something different. Wake up, the Universe is saying, Wake up. The storm doesn’t feel like a threat so much as it feels like an exclamation point on the message Stop. The storm ends and we finally arrive at 2 pm. The name of the marina: Blue Haven. Exactly what we need.