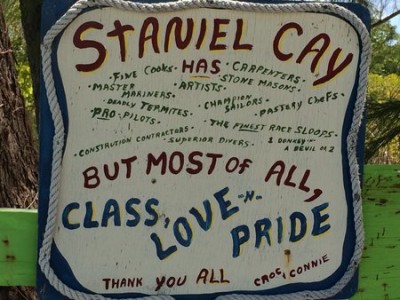 It’s April Fool’s Day. We briefly consider playing a joke on the Norwegians – rowing up to their boat in the early morning and depositing the boys on it with a note that says “We’ll meet you in Staniel Cay this afternoon to reclaim our progeny.” Trond and Karolina are in their early 30’s and dated six months before setting off on a year-long sail together. Trond likes risks. He once rowed across the Atlantic in 60 days with a friend in one of those pod-like water crafts. This might be funny … until Malachi throws up. We decide against it, unsure if they even know the significance of April 1st.

It’s a slow and relaxing sail to Staniel Cay, floating along at 2-3 knots. After anchoring, we dinghy in to the famous Staniel Cay Yacht Club and walk around the tiny town to get some bread. We’ve been traveling with the Norwegians for the past two weeks but they leave early in the morning. We will miss them. They’ve been fun travel partners and we bond about minor things (Karolina also misses ice cubes). After dinner on shore, we get in the dinghy and Matt revs the engine. “I love that sound,” Malachi says. When I ask why, he 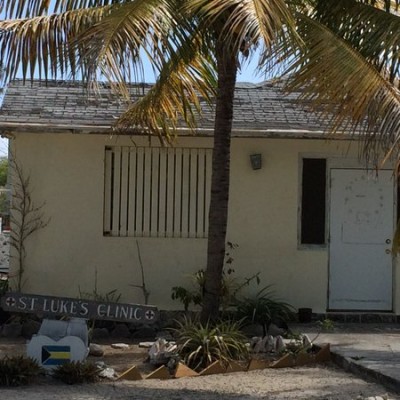 replies, “It’s the sound of adventure.” After putting the boys to bed, we reassess our anchorage. We are almost on top of another boat and can’t figure out why. The standard anchor chain length is a scope of 5-7 feet of chain per one foot of water. After radioing the boat, we find out they decided to be creative and have a 10:1 ratio. Because we anchored last, it’s our responsibility to move. We move and then are too close to another boat. We move again and re-anchor. The boat ahead of us is roaming all over in the strong 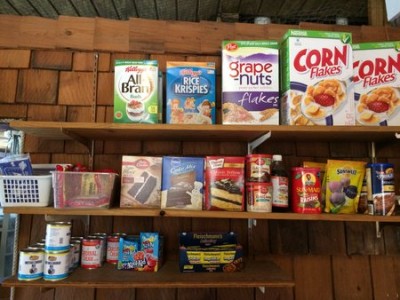 current. Matt’s not happy but it’s dark and too late to go anywhere else in the shallows that exist here. It’s 10:30 pm and I just want to be done. We go to bed and hope for the best.

There are two famous things to see here: Thunderball Cave/Grotto (scene of the eponymous James Bond movie with Sean Connery) and swimming pigs. After dinghying near the Grotto to check out a new anchorage, we go over to see the 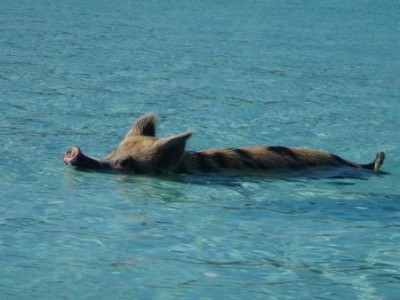 swimming pigs. It seems they’ve gotten lazy because visitors feed them on the beach rather than making them swim for their supper. Only one or two of the twenty or so pigs come out to us for carrots. A boat arrives and dumps a huge bucket of food scraps on the beach, resulting in porcine mayhem. The large pigs put their snouts under the little ones and literally toss them up in the air to get them out of the way. I always thought ‘when pigs fly’ was just an expression. 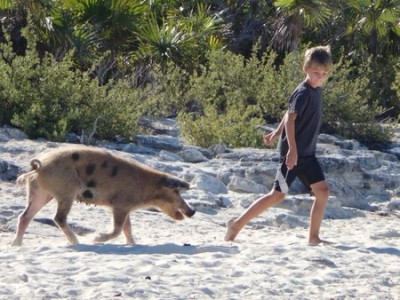 Apparently not. Jim, our Annapolis friend, is anchored there. We go over to say hello. If he had been near us on April 1st, we were going to hang a sign on his boat that said, “Jim’s Day Spa: Massages $10/hour” with his phone number beneath it. The idea for this joke came about when Matt and I were in an anchorage with a bar scene and a few boats (and owners) that were in such bad shape (boats and owners) they looked like they could not be moved. “Wouldn’t it be funny,” I said to Matt when we were there, “if we passed a wreck of a boat that said ‘Bob’s Day Spa – massages $10/hour?” Matt looks at me in 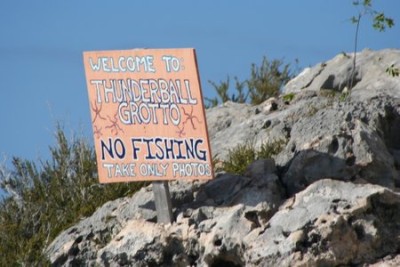 wonder. “That’s a great idea,” he exclaims. “I wonder why one of these guys hasn’t thought of that.” I start laughing and look at him in disbelief. “Are you joking? What woman in her right mind,” I ask, “would get on a boat alone with some guy with that kind of sign?” “Why not?” Matt asks. Maybe I just have a better imagination than he does but, in less than 5 seconds, multiple graphic bad-ending scenarios [most involving kidnapping, rope and many unhappy months (or years) at sea] flash through my mind. 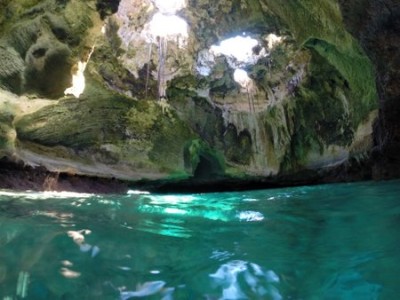 In the afternoon, we move the boat and re-anchor right outside the eastern side of Thunderball Grotto. We can swim off the boat to the back entrance of the cave. At low slack tide, we duck under the rock overhang and swim in. Once inside, it feels like a beautiful, watery cathedral. Shafts of sunlight stream down through the openings at the top of the cave and illuminate the multitudes of colorful fish swimming around us. A day or two later, Matt and I go back a second time We spend a frustrating Friday trying to get groceries and do laundry ($28 for one load) but have a great time on Saturday. We find a trail on the eastern side of 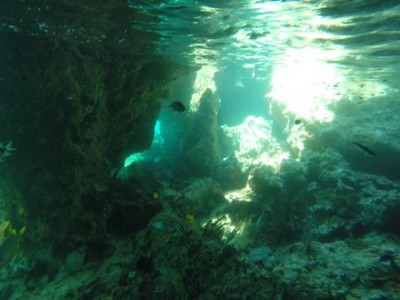 the island that zigs and zags along the top of the rocky shoreline. The views are amazing and it feels great to hike again. We end up down at a beautiful cove off of Pirate’s Bay Beach, swimming and shelling in the crystal clear water. There is no one else here. “This,” I tell Matt, “is something to remember.” 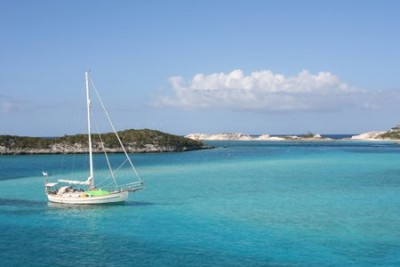 Saturday afternoon Matt dinghies in to the yacht club for an NCAA feast of two back-to-back college basketball games. He is in heaven to finally have a place to watch them. The boys and I work on Easter eggs and decorations. They are delighted by the simplest things. I fold a long piece of paper, draw the shape of a rabbit, cut it out so the bottoms stay connected, and then pull it open to show a long string of rabbits. The boys are enthralled. It would be nice if everyone in my life were this 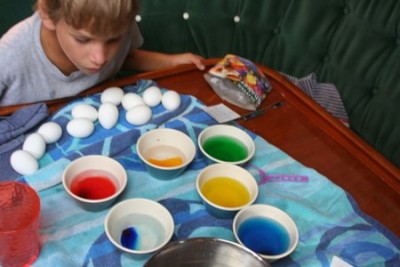 Getting ready to decorate Easter eggs

easily impressed. We hang the decorations and I look up to see Joshua attempting to hang a hard-boiled egg. From the ceiling. With tape. I go to great effort to explain why this is not a good idea. Joshua is so disappointed that I find myself promising to try and make an egg harness. In the midst of assembling a series of strings and knots around his egg, I suddenly realize what I’m doing. Oh my God, I think. I’ve got to get back to work. I’m making harnesses for Easter eggs! A few seconds after hanging the harnessed egg, it explodes on the floor. Clearly not a patentable product. 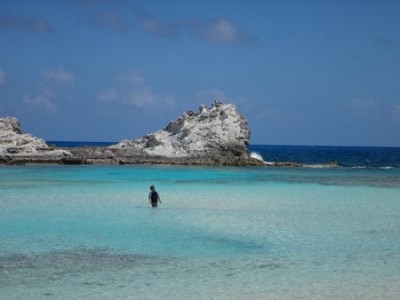 Malachi in our private cove off of Pirate’s Bay Beach

One of the reasons we’ve stayed here is because Matt wants to go to church on Easter Sunday. We show up at 11 am, along with 60 locals and about 20 other tourists. I’m pleasantly surprised to find the church delightfully cooled by light air conditioning. Five minutes into the service, the power goes out. I glance down at the worship pamphlet with some trepidation. These island services can be long and it’s hot but this doesn’t look too bad. When I realize the first three songs aren’t even the ones printed on the program, I settle in. It is the kind of church with lots of shouting and clapping and singing (volume being 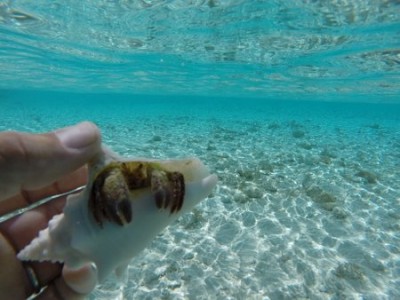 more important than tone) from the local congregation. All of this is augmented by much gesticulation, adulation, and perspiration. About 80 minutes into it, I look around. Sixty percent of the tourists have opted out. Malachi whispers that it’s too loud and he feels sick. I look down at the program. There is only something called “The Word” and one song left. I put my arm around him and say it won’t be much longer. I am a liar. The deaconess introduces an older gentleman who has been sitting quietly behind the altar. He has a shrill yet husky voice that undulates as he preaches. It’s one of those sermons where you don’t focus so much on the 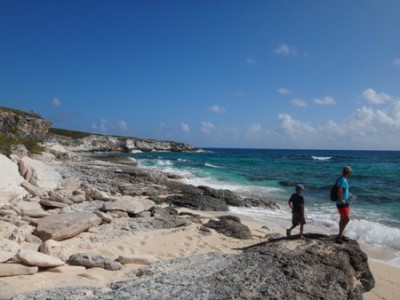 The eastern shore of Staniel Cay

message so much as every third to fifth word that is shouted out at you. I tell you we BELIEVE… The Lord has RISEN! My brothers and sisters, he is ALIVE. ALIVE! All of the singing and shouting and prayers have simply been the opening act for this James Brown-like character. Twenty minutes in, I sneak a glance at Matt. He is struggling to stay awake. How anyone can be sleepy while being shouted at is beyond me. More tourists have snuck out. Malachi leans against me. This has become an exercise in 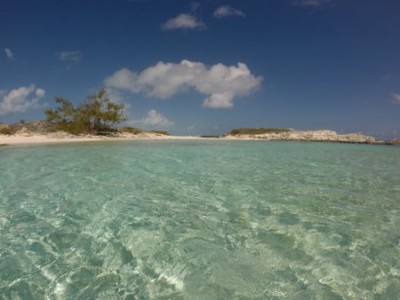 endurance. It feels more like the crucifixion than the resurrection. The sermon is interrupted every few seconds by choruses of ‘Amens!’ and ‘Hallelujahs!’ and “YES! YES!” as well as repetition of what was just said. I find it interesting that what is considered worship in one church would be considered heckling in another. Two hours after it starts, it’s over. I want to drop to my knees and give thanks.

Tomorrow, we continue on.