It’s time to get home. This is a feeling that arises more frequently now and it manifests differently for everyone. For the Norwegians, it was mounting frustration with the inefficiency of things. For the boys, it’s increased chatter about Cleveland (and Legos). For me, it was us spending an entire day trying to do laundry (closed in the morning) and buy some groceries (one tiny market was closed with no posted hours; the other, still closed at 2:25 pm had a sign saying it opened at 2 pm), resulting in traversing the island for most of the day. For Matt, it is a sporadic general frustration with everyone and everything. After telling the boys to do their jobs for the nth time, Matt barks, “Do your damn jobs!” Joshua, with his dimpled cheeks, looks at Matt with a mock serious expression and chirps, “What’s my damn job?” Malachi and I burst out laughing. Matt stomps up the

companionway. In the afternoon, the frustration gets aimed at me. I’ve either overdone or underdone something. “Geez!” Matt shouts, “Sometimes dealing with you is like dealing with The Rain Man.” Somehow I sense this is not a compliment. So … upon departing Staniel Cay Monday morning, we decide to make progress northwest toward Nassau but to see what we can on the way. In the afternoon, we anchor off of O’Brien’s Cay near Little Halls Pond Cay (an island owned by Johnny Depp). 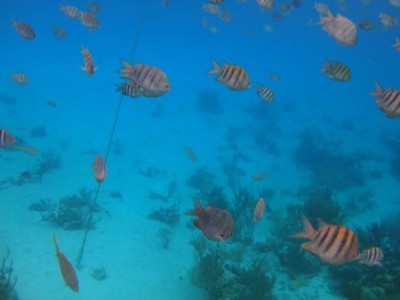 We leave to snorkel the Coral Garden Reef and a plane wreck that is only 50 yards from our boat. When we return, we find another boat has irritatingly anchored right near us, despite all of the space. The captain Matt hired in Newport said he played his music really loud and walked around topside naked when it looked as if another boat was going to anchor near his. Interesting tactic. Perhaps we should try this. Perhaps not. 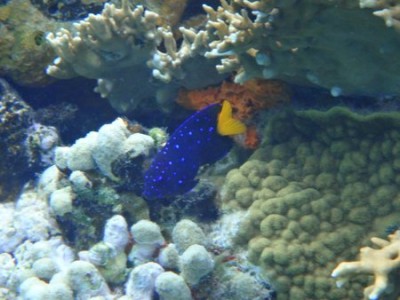 Matt, the more sociable of the two of us, gets into many conversations with fellow sailors about where they’ve been and what they’ve seen. This has resulted in great advice on places to visit that are not listed in the guide books. One such place is Jeep Reef. The Aussie who told Matt about it said it’s some of the best snorkeling in the world. We have a rough idea of where it is and, on Tuesday morning, we dinghy around until we find it. There

On the banks, Exumas

is a small buoy above the reef where we can tie up. Towering coral columns and tons of sea life exist in these 20-30 feet of water. We float over the reef and see the remnants of a Jeep down below. A barracuda eyes us menacingly (this is the only look they sport). After a while, we head back to the boat. We are only a few yards away when we see our first shark while snorkeling. It’s only about 4

feet long. I go after it but it disappears. Right before getting into the dinghy, I peer under the water one last time. A sting ray is zooming up from the bottom and headed straight at me. I get a little freaked at this enthusiastic greeting. About ten feet from me, it appears startled and heads back down. Perhaps he mistook me for someone else? Then, just past it, I see the one creature I’ve been wanting to see but haven’t. A lobster scuttles from one coral cave to another down on the sandy floor. I’m ecstatic but he disappears before anyone else can see 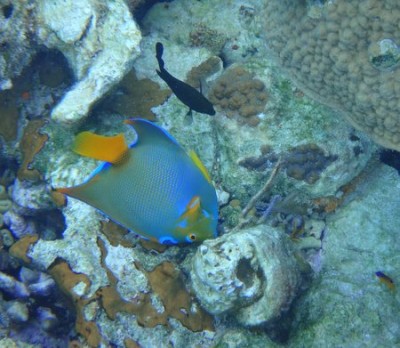 him. After snorkeling, we dinghy to yet one more deserted beach and drink hot chocolate to warm up.

In the afternoon, Matt and I dinghy back to the Coral Garden and then snorkel the plane wreck again, which is only 50 yards off our boat. One of my favorite things is watching and listening to the fish eat coral. I remember first seeing this while solo-snorkeling off of St. John. I was floating above a large 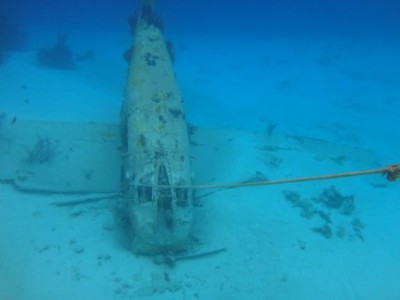 parrot fish and realized the crunching I was hearing coincided with it appearing to gnaw on coral. I captured it on video and played it for the family when I returned to the boat. I was astonished that fish eat coral (and that it’s so noisy). Matt looked at me in surprise. “Everyone knows that fish eat coral,” he says. Well, everyone except The Rain Man. 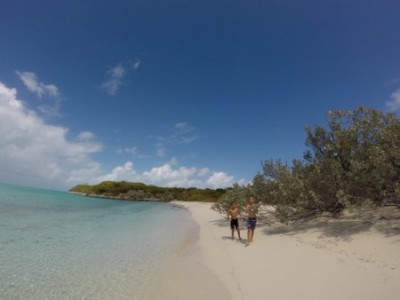