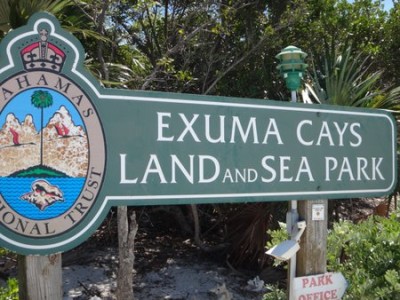 We leave O’Brien’s Cay Wednesday morning and at noon moor at Warderick Wells. This is the headquarters of the National Land & Sea Park, a 22 x 4-mile nature reserve that encompasses numerous islands. The entire Bahamas are visually stunning but some places are just over-the-top. This is one of those places. 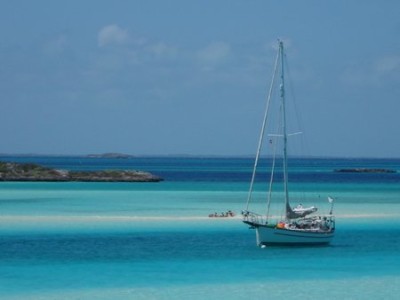 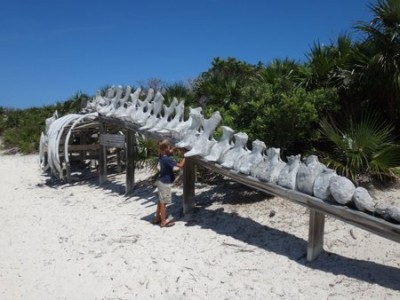 We dinghy in to the park headquarters and see a sperm whale skeleton on the beach (an unnecessary death due to consuming plastic, which can look like jellyfish, and garbage). We hike up to Boo Boo Hill to see the views and the blowholes (12-24 inch openings where, when the sea water rushes in, air blows up from caves below). The boys are leaning over one and laughing. They call me over. I follow their instructions, get down on my knees and 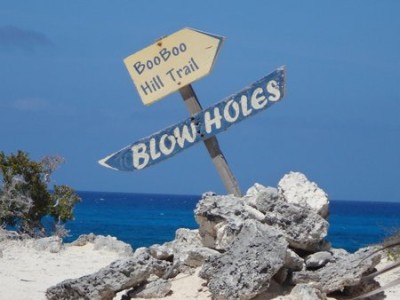 lean my head over one of them expecting to feel a slight breeze. We wait for a few seconds and then a huge gust of air hits me in the face and blows my hat right off. I yell because I’m so surprised. The boys are hysterical. In the late afternoon, the boys kayak to a sand flat right off the stern of our boat. Matt and I take the dinghy and snorkel the Rangers Garden Reef, a few hundred yards from the boat. 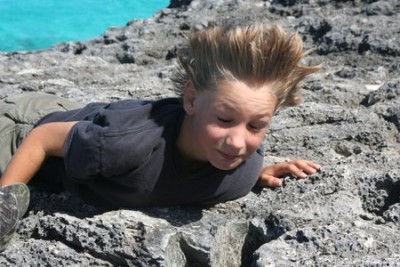 Malachi on top of a blow hole

The next morning we plan to leave by 10 am. The boys want to see the lobsters we saw the day before so we snorkel the reef again as a family. Lots of beautiful fish and two 2-foot lobsters. The boys are so excited. Just as I finish taking a video of one, Joshua yells, “Shark!” We turn to see a 6-foot nurse 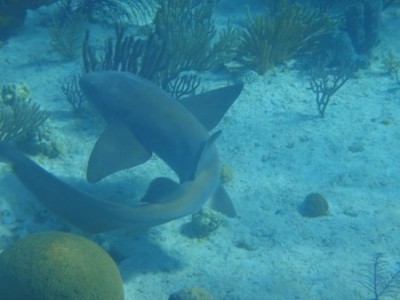 shark roaming around. Then, right before we leave, we see another shark. It’s definitely not a nurse shark (a non-aggressive type). We check our reef identification book – it might have been a bull shark.

After departing Warderick Wells in the morning, we head for Danger Cay. A fellow boater told Matt about a

place just off of it where the sharks hear the sound of a boat and start circling. I’m excited but don’t want to rev up the boys in case nothing appears. We get there and idle for a short time. I start to think it might be a bust. Then, a few minutes later, we start seeing dorsal fins near our dinghy, which is trailing behind us. They circle the dinghy. I’ve splurged on what little meat was available in 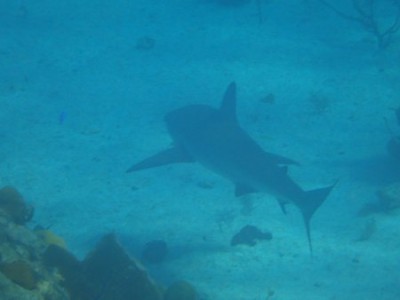 Staniel Cay and pull out two packs of hot dogs. I throw one out to see if they’ll eat it. They surge forward and attack it. As soon as we throw one in, it’s gone. Sometimes a big fish grabs it first. The fish’s mistake because then the shark grabs the fish. The whole experience (and hot dogs) only lasts for about 10 minutes but is well worth it. On the way out, we see a dive boat with divers in the water splashing around to try and attract the sharks. Maybe the hot dogs 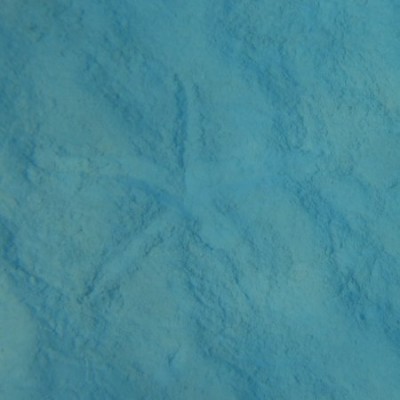 A starfish below the sand

were just an appetizer … I will say that, although I love seeing the sharks, we maintain a healthy respect for them. One boater told us his friend was bit on the head by a bull shark while spearfishing. Apparently that experience didn’t deter him because he went back for more (and was bitten on the shoulder by another). Although a shark bite in itself can be deadly, it’s much more so when in remote places with little, if any, emergency rescue operations. 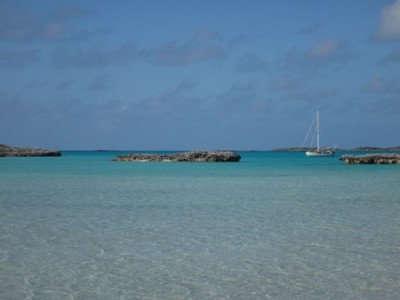 We continue on and have a nice sail to our next spot – a beautiful anchorage off of Shroud Cay in the afternoon. Matt and Malachi swim while Joshua and I kayak into the mangroves. We’ve heard there are creeks that cross through the island and these southern estuaries can only be explored in non-motorized vehicles. The guidebook says this cay is a nursery for conch, lobster and sea turtles. Joshua is excited to see them. We kayak in 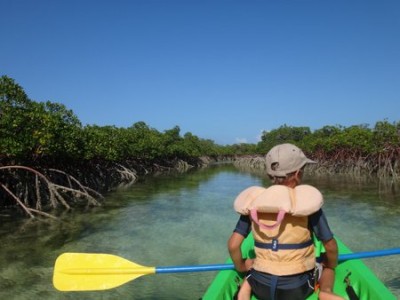 and it’s peaceful and beautiful but all we see are a few tiny fish. “This is disappointing,” Joshua says. I’m not sure what he was expecting although the term ‘nursery’ does conjure up rows of miniature cribs with sleeping baby turtles; tiny lobsters peacefully waving little rattles, and conch shells … well, conch don’t do much. So maybe just small conch shells with little baby blankets. 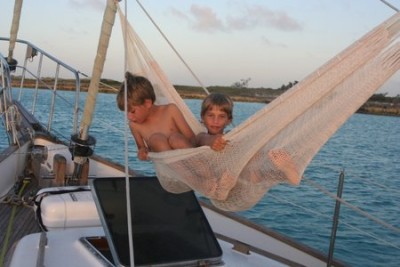 We get back to the boat and go swimming. While I make dinner, Matt and the boys surprise me by hanging up the hammock they gave me for Christmas in 2013. This is the inaugural swing. That night, I go up on deck with a mug of hot chocolate, hang in the hammock and watch the stars. Matt asks how I like it. “It’s deliciously decadent,” I say. “Like chocolate molten lava cake. But without the calories.” Life doesn’t get much better than this.