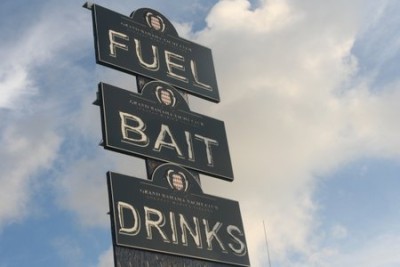 Matt and I do our night watches completely differently. I usually pack him a bag of snacks before I go to bed. He sets his alarm for every 15 minutes and catches catnaps lying down in the cockpit. I never try to sleep on my watch. For one thing, I’m too paranoid something will happen while I’m at the helm. For another, the nights are too magical to sleep and I’m usually not tired until the end of it. I’d much prefer to watch the stars and the phosphorescence. I have my iPod and play the song Cool Change by The Little River Band. My favorite line is “It’s kind of a special feeling; out there on the sea alone. Staring at the full moon like a lover.” It is special out here and I will miss this part of sailing. The vastness and all of the possibilities the Universe

represents. I’m thinking, as I stare up at the stars, that the world has gotten bigger. Not the physical world, but rather my perception of my world. I think that as one chooses certain paths in life and, as one travels further down a path and invests more and more time and energy in that path, it can sometimes seem that there are fewer and fewer opportunities to take other paths and that the only option is to keep going deeper down the same path (career or otherwise). It’s not true, it’s not true, whisper the stars.  The truth of some things actually becomes clearer in the dark of the night. 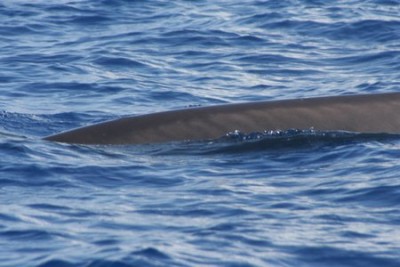 Matt takes over at 4 am and then I’m on again at 7:30 so he can sleep. We get a visit at 10 from two large creatures. I originally think they’re pilot whales but they don’t have a snub nose. If they’re dolphins, they are black and huge. One is at least 14 feet long. Maybe it’s a kind of small whale with which we are not familiar. At 1 pm, we’ve still gone no faster than 2-3 knots this whole trip. Matt finally waves the white flag or we will be doing another overnight. We motor sail the rest of the way. We dock at Lucaya Marina on Grand Bahama Island because there’s supposed to be a pool and a little village and it sounds like a good place for the boys. We find out that part of the marina is still under construction so they’ve put us across the cove and we are not near anything. We decide we won’t stay past the night and they let us stay tied up to the fuel dock. The boys play on the dock, we shower and leave the next morning at 8:30 am. Perhaps because of his recent overnight experience with the resident onboard harpy, Matt decides to motor sail to our final destination before 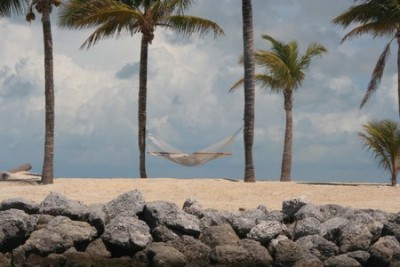 crossing the Gulf Stream to the US. There is still almost no wind. We get in to Old Bahama Bay Marina at the northern end of Grand Bahama at 3 pm on Friday. We see a hammock as we pull in. Hmm, …maybe we’ll stay an extra day here. It’s a nice place and a good one in which to recover. There is a pool, laundry, restaurant, beach, etc. The resort has bikes so we go into town on Saturday to try and find the lady who makes bread (we find her street but don’t know which house so we turn back to beat a storm that’s coming). The beach along the town has piles of literally thousands of conch shells, tons of dilapidated and falling down buildings. Matt has a hard time understanding how a place can be so poor. We spend part of the day getting ready to go again which, for me, means prepping a lot of food. In the afternoon, we cool off in the pool. We meet the bread lady walking the dock at 5:30 pm and get two loaves. We’re almost ready now. 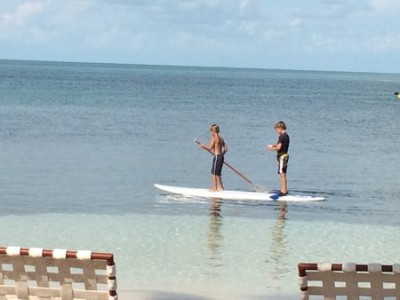 It’s Sunday and we leave later this morning. Still to be done: hoist the dinghy on board and stow it; get more ice; get garbage off the boat; take off. We could use some water but they don’t have reverse osmosis water here. This passage will be another overnight sail. We are headed to Cape Canaveral. But, if there is good wind and we get a lot of speed from the Gulf Stream, we may be able to get to Daytona. Regardless, it will likely be 36-48 hours depending on where we land.