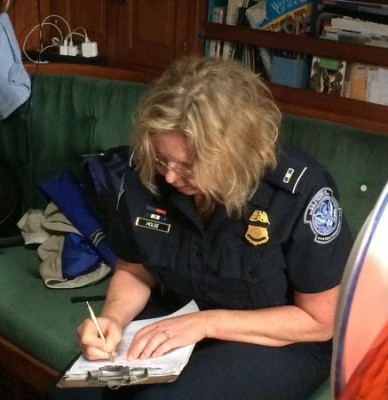 The reason the agriculture agent from the U. S. Customs & Border Control Office is sitting in our boat is simple: border-crossing fruit. Or, more specifically, oranges. She has come to confiscate them. What happened was this … after arriving at Port Canaveral and docking at the Ocean Club Marina around lunchtime, we eat lunch and shower. Then we rent a car to check in at the customs office and do some other errands. After arriving at customs, I begin walking to the counter with our passports and boat documents. Matt elbows me aside and whispers, “Can you please just sit down and let me handle this?” Aye, aye, Captain. The boys and I take a seat. Matt goes through our paperwork with the official and answers questions. After a while, she says we’re almost done and hands him our passports. Then she asks, “You don’t have any fruits or vegetables on board, do you?” I freeze – Geez, is this St. John all over again? But then I relax because Matt said he’d handle it. Instead of answering the question, Matt looks at me. Really? Didn’t you just say you were handling it? I gulp, unsure of what to say. Flashes of what’s in the fridge flit through my mind (and yes, those images include fruits and vegetables). Can I be thrown in jail for unintentionally smuggling in fruit? I refuse to lie. “Yes,” I say. “We have some oranges in the fridge.” Matt gives me a look. I give him a look back. Ugh, this is St. John all over again. The customs official goes to get the agricultural agent. The agent comes out and does not look pleased. “So all you have are a few oranges?” I can tell she wants me to say yes but it’s just not true. “Well,” I reply, “and some zucchini … and some potatoes and onions.” Matt gives me another look. I am tempted to jam my elbow into his ribs. The officials confer for a few minutes and then ask where our boat is. Matt says it is docked at the marina. We are told the agricultural person will follow us back to our boat and confiscate anything that may contain insects. Rigidly, we walk out the door. As soon as we are out of earshot, Matt makes a comment. “THAT was handling it?” I shoot back. “Well,” he concedes, “I guess not. I got surprised. But I wouldn’t have lied either.” I cut him a break because it was a taxing overnight sail. We go back to the boat and fill out forms, all the while listening to a lecture about pest infestation. After confiscating some of our produce (which, by the way, was purchased in the Bahamas but came from the U.S.; which makes you wonder why we don’t have a problem exporting our pests), the official finally leaves. Matt and I make jokes about how she’s probably sitting in the government vehicle eating our oranges.

About the previous overnight passage …. We leave a little before 11 am on Sunday and have all the sails up shortly after. The winds are perfect for going from the Bahamas to FL: 18-20 knots out of the southwest; we are going 4.5 to 5.5 knots. By 4 pm we are definitely riding the Gulf Stream because our speed increases to 7.5 to 8.5 knots. We’re almost a quarter of the way there. We see a pod of 6-7 dolphins leaping toward our boat; Joshua is fishing and gets a bite but doesn’t catch anything. I’m secretly relieved because I have zero interest in gutting a fish on board (or gutting one offboard, for that matter). 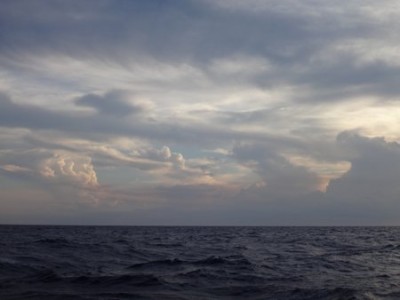 Matt gets a weather update on the VHF. We can already see the thunderstorm clouds that are predicted to hit this evening. The forecast says the winds might get up to 60 knots. We have an early dinner and the boys, thankfully, head down on their own and fall asleep. By 6:30 pm, the winds are 18-25 knots. Matt is edgy. He settles down once we decide to pull in the head sails and triple-reef the main. I watch him hanging onto the boom in all that wind as he adds a third reef. I have so much admiration for him and his nautical skills. He 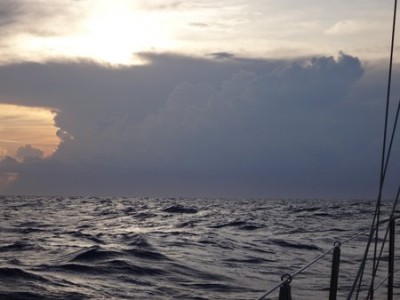 The cloud that keeps getting bigger and bigger

had spoken to someone on the dock in the Bahamas who said he didn’t even think it was worth it to ride the Gulf Stream because it can take you further out of the way. “But based on the trigonometry I did, …” Matt says, and goes on to dispute what was said. Now, although I confess to zoning out when he went into detail on the trig stuff, it is amazing to me how his engineering mind loves to calculate all of the myriad variables involved in sailing. What I find tiring, cumbersome and somewhat confusing, he finds stimulating and exciting. Our minds are so different. It is a cool thing to watch your spouse do something difficult and be impressed. 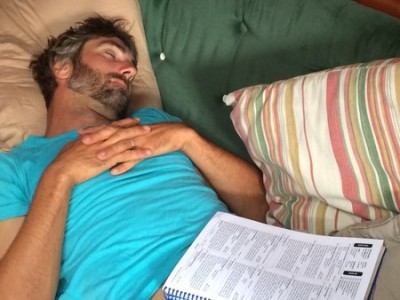 The captain, exhausted from his watches (yet still looking at guidebooks)

By 7 or 8 pm, the winds are up to 30 knots and lightning is hitting 150 degrees around the boat. Off our port side, there are blasts of it above the clouds with occasional forks of lighting coming straight down from the clouds. Behind us, more lightning illuminates the whole sky. I’m timing the strikes. They happen literally every 2-4 seconds. Matt and I have our life jackets and jacklines on and settle back to watch the show. It’s like being in a place where there are two sets of fireworks going on simultaneously and you keep whipping your head back and forth. It’s incredible to see because of the visibility over the water in every direction. The small grill bolted onto the back of the boat has this habit of whistling during really high winds. It’s an eerie flutelike sound that provides a soundtrack as background to the storm.

At one point, Matt said to me, “It’s a good thing that lightning usually hits the tallest metal object around.” I look to see if he’s joking. He is. Unfortunately, we don’t have a huge cargo ship next to which we can hide. Matt comments that at least our last sail as a family isn’t boring. Although, with sailing, boring is good. Matt goes on, “Just so you know, we could get hit by lighting.” I nod and ask how we would know. “Oh, we’ll know,” Matt says emphatically. “There will be a giant crack and it might blow out the electronics.” [This actually did happen to the previous owner of the boat]. “And,” he goes on, “it could ignite a fire.” Hmmm, ok, I’m thinking as I mentally review where the fire extinguishers are and wonder if I still remember how to use them. “And,” he continues, “sometimes the lightning blows a hole in the hull because the electricity is trying to get back to the water. You’d have to watch the bilge. If the bilge pump starts running, you’ll know we’re taking on water. So you’d have to manage that as well.” By this point, it’s starting to sound like a joke. I look to see if the last part was supposed to be funny. It wasn’t. I’m assuming that when he says ‘you’d have to manage this,’ he’s saying it because he would be managing other things and not because he’d by lying in the cockpit cooked like a crispy piece of bacon. He calls his mom on the satellite phone to give her our coordinates in case anything happens (we later find out this really freaks her out). The lightning goes on for hours and literally hits thousands of times before the storms end. I find it rather exhilarating. 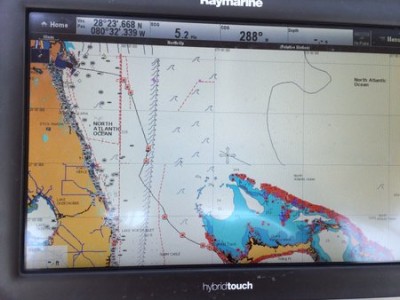 The black line our passage from West End, Bahamas to FL.

I go down at 9:30 pm and try to sleep. We have a triple-reefed main and the staysail out. I come back up to check on Matt at 11 pm. “We got the s–t kicked out of us,” is how Matt so eloquently puts it (I knew this because the boat was pitching and stuff was flying around below). I come back up to take over at 2 am. Matt gives me an update. The wind has stayed in the 30’s but was gusting up to 42 knots at times. He said that, at one point, there was lightning 360 degrees around the boat, and that there could be more storms ahead. I look around and there is not a single star – just a thick blanket of dark clouds. The only bright spots are the distant lights from tankers and cruise ships as well as the

phosphorescence riding the bow waves. Lighting still strikes every 5 seconds in one spot off the starboard stern. It occurs to me this might be my last night voyage for a while. I lean over the side and tell my little phosphorescent friends that I might not see them for a while. I’ll miss you, I say. And, yes, it is perfectly acceptable to talk to ocean life if it’s 4 am. Matt comes up at 5:30 am (I was going to let him sleep until 6) and I go down to sleep. I come up again at 8:30 and look around. “Wow,” I say. “Ugh, look at the water.” It went from the amazing blue-greens of the Caribbean to a dull greenish-gray. Welcome home. 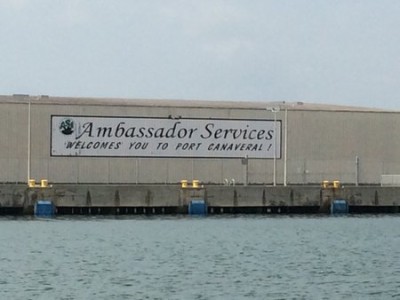 On the way in from the channel, we pass a number of marinas. We also pass two armed border control boats. They look small, fast and agile. They are grey and bright orange with guns mounted on the front. We’ve seen them a number of places where there is a naval presence. Whenever I see them, I want to take a photo. “They look intimidating as hell,” Matt comments. I pull out my camera but the sight of the armed officer holding a machine gun and looking at me through his mirrored sunglasses is enough to make me put it down. I turn on my cell phone for the first time in 5 months. Who is the first person I call? Mom, of course. We debrief on the passage as we continue in the channel, docking at the Ocean Club Marina in Port Canaveral at 11:30 am. The hallmark of a successful voyage is best expressed by Joshua: “Well,” he says, “no one threw up.”