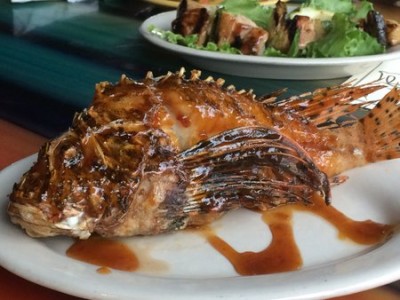 We stay at the Ocean Club Marina in Port Canaveral for two nights. The plan was originally for just one but it was so nice and the boys wanted to stay an extra day so we agreed. Hours after we arrive, I’m walking down the dock hearing that song ‘proud to be an American’ playing in my head. I can’t even describe how wonderful it feels to be back in the States. We rent a car and, after the whole customs thing, we go to the grocery store. We 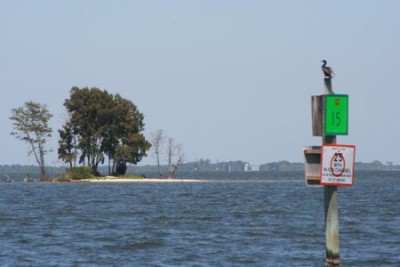 Even in the ICW, there are islands …

don’t even need that much, but I want to see if a grocery store is really is as great as I remember. It is. It clinches the feeling of ‘we’re home.’ If it feels this good just to be in FL, I can only imagine how wonderful it will feel once we’re back on familiar streets and seeing familiar faces. 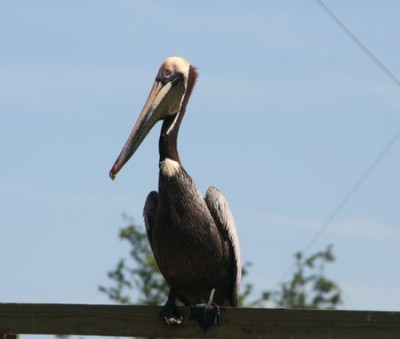 We have a few more errands to do the next day and only have the car until 2 pm. We leave the boys in the lounge with a movie and art supplies. Our first stop is Home Depot to get a water filter. Matt goes in while I stay in the car and organize some things for the post office. He’s back in 5 minutes. “Already?” I ask, stunned. “I love the U.S.” he says. “That would have taken half the day in the islands.” The next stop is Ace 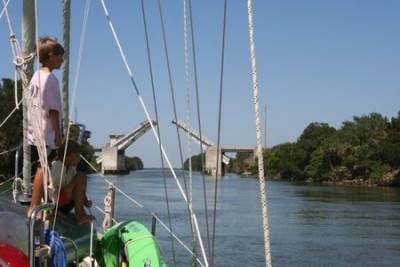 Waiting on a bridge opening

Hardware to fill up the propane tank for the stove. He’s back in the car in less than 5 minutes. We look at each other and start laughing. The efficiency is amazing. It feels great to be home.

We leave the marina Wednesday morning and spend the day motoring up the Intracoastal Waterway (ICW). That night, we anchor out in a secluded and peaceful spot. 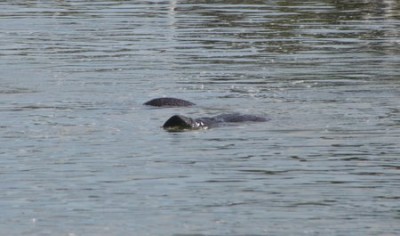 We see 6-8 manatees in the ICW

On Thursday we continue up the ICW and reach our goal, The Marina at Hammock Beach, in the afternoon. This is the spot we spent a month last March when we realized we couldn’t get further south before hurricane season. It feels as though we’ve come full circle. We celebrate by jumping in the resort pool. We decide to spend a few days here using the resort, doing boat tasks, relaxing, and getting in some office time. The boys received Legos in the mail so they have a 7-hour Lego marathon in the lounge. 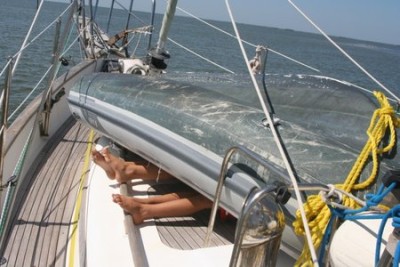 The boys, ever resourceful, find a new hideout … under the dinghy

Some of our time is spent talking about what’s next. We are going to move the boat up to St. Augustine; the passage north will begin there. “You know…,” Matt says, “if my mom took the boys, it might be kind of fun for us to do the last passage together.” “No, thanks,” I respond, almost before the words leave his mouth. Later, he brings it up in another way. “You are familiar with the boat, and we’ve done this before so it would be nice to have you along …” “No!” I say a bit more forcefully. He tries to sweeten the deal by saying we’ll have 1-2 other crew members on board to help. Hmm… Being in a confined space with two complete strangers who may or may not get seasick and may or may not bathe the whole week. He sees I am unconvinced and starts to 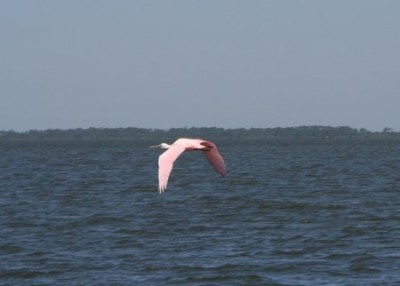 Looks like a flamingo but it’s a roseate spoonbill

say more. “Listen,” I finally say. “Although I feel guilty about deserting you and leaving you to the whims of the Atlantic, there is no way I’m doing 6 or 7 overnights in a row. It is worth lots of dollars to me to sit that ride out. So hire whomever you need to hire, but please don’t ask me to go. Because I’m not.” Just to solidify this reality, I book plane tickets for me and the boys to head up to NH on April 30. 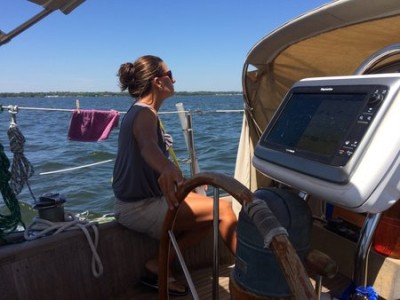 To find crew, Matt crafts an email describing the boat and the upcoming passage and sends it to Hank, a person who manages an offshore passage group for boats looking for crew and potential crew looking for boat trips. Within 24 hours, he has a few good responses. One of them is Andrew, someone we met on the docks in Jacksonville, FL last March and who has been preparing his boat (and family) to make a similar sailing trip to what we’ve just done. The other is Alexander from NYC. He sent a lengthy self-description as well as an impressive sailing resume. He is 38 years old, started an IT firm at age 16, is 6’2” and 185 pounds. He works 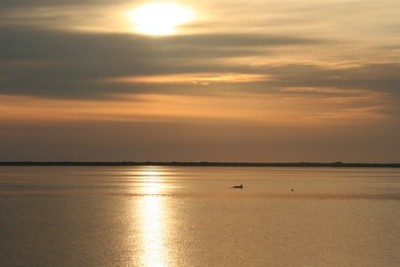 Leaving the anchorage at sunrise; a dolphin sees us off

out a lot and has numerous outdoor interests. He even sent a photo – tall, dark and handsome. “Hmm…” I say to Matt, “maybe I should go on this passage …” I have taken to referring to this potential pair as “the A team.” I’m already feeling less guilty about ducking this last passage. Captain Matt and the A-team will have a much better time on their own.