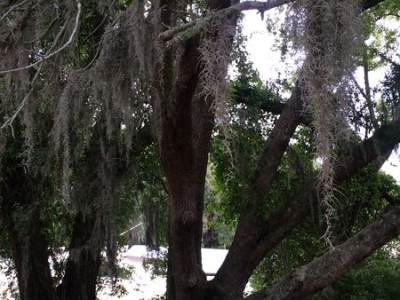 We move the boat up to St. Augustine on Tuesday afternoon, an easy half day in the ICW, and dock at a marina. We have an afternoon and a day until the boys and I fly to NH. I tell the boys I want them to shower before we leave on our trip. Malachi wants to walk up to the marina and shower before breakfast. I say the rule is that he has to have a buddy. He asks Joshua to go but Joshua wants breakfast first. “I can’t wait until I’m a teenager,” Malachi complains. “Then I won’t need a buddy and I can go places on my own.”

Part of the pirate ship

Joshua nods and says, “It’s better that way. Because if you get taken when you’re a teenager [abducted is what he means], Mom and Dad will already have had enough time with you.” Hmmm…. seven-year-olds have interesting logic. Probably the reason they are not allowed to run for public office. The boys and I spend hours packing things up, clearing out the boys’ berths and re-organizing provisions for Matt and the new crew. Joshua wants to know why he can’t go on this passage. Matt tells him he can be a stowaway and then has to explain what the word means. Later, as we finish packing, Joshua asks if I can help him find a place to hide on the boat. No is the simple response to that request.

Wearing their crowns at the May Day Festival

On Wednesday morning we walk two miles into St. Augustine to see our Annapolis friends Dan and Jaye. They are part-time pirates on a replica of a Spanish cargo ship and Jaye gives us a tour. In the evening they come to our marina and meet us for dinner. I get the boys to bed a little early because we have to wake up at 4:15 am for our flight to NH. It’s an uneventful flight and we arrive in NH at 11:30 am. My sister picks us up, sans children. The 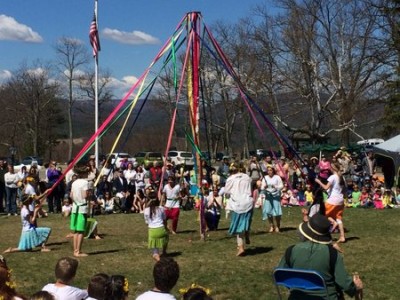 Dancing around the May Pole

older two (4, 7) are in school and the 8-month-old twins are with the nanny. We immediately jump into the organized chaos of family life.

On Saturday, we attend the May Day Festival at the high school version of their Waldorf School. Think granola, hemp fabrics, communes and lots of Birkenstocks. Most of the boys have hair longer than mine. Even among this eclectic bunch, there are a few who have distinguished themselves further by adopting a Sikh lifestyle, changing their names, and wearing turbans. The boys make May Day crowns and adorn them with ribbons and flowers. There is a 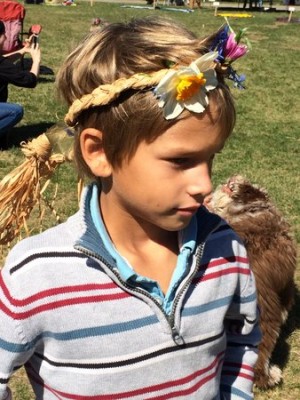 parade and a ceremony with the high schoolers dancing and singing around the May pole, accompanied by a woman on an accordion. I later tell my sister it is one of the few high schools in the US where it is perfectly acceptable for 17-year-old males to prance around barefoot with flowers in their hair and bells on their ankles, waving scarves in the air. My sister’s husband doesn’t attend. When I tell him about the afternoon, he rolls his eyes. I’d love my boys to attend that kind of school. I would guess that if more schools had that type of curriculum, there’d probably be fewer wars.

As for Matt, he is still down in St. Augustine making progress toward the upcoming passage. Alexander the Great has committed as did one other person. The crew arrives either Thursday or Friday. Matt 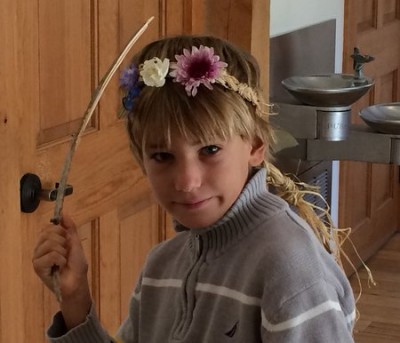 Malachi holds up his stick sword in a menacing manner, perhaps not realizing that the three flowers in his hair detract from his fierceness.

was able to sell the kayak we bought used in St. John for only $50 less than we paid. Let’s hope selling the boat follows a similar trend.