On Sunday we sail to Soper’s Hole (west end of Tortola) to exit British customs. We then sail to Cruz Bay on St. John to check in at US customs. It’s the first time I’ve been through customs on a boat. We pull up to the customs dock with only inches to spare behind a government boat. I leap from the side of the boat to the dock and tie the lines before Matt stops the boat. Two customs officials are outside. They do not seem impressed by my aerial agility. We go inside but then have to go back out and get the other crew members (i.e., the boys). Before we go in, we make it clear to the boys that this is serious and no messing around is allowed. We make it through fine with the passports and I think we’re done. The customs official then says we need to talk to the agricultural customs official. I have no idea what this means. She has braces and is cracking her gum. It’s Sunday, she seems bored and it sounds like they have a game on in the back office. She asks if we have garbage on the boat. And then looks at me as if willing me to respond correctly. What kind of question is that? I think. I feel like I’m participating in a silent test for which I am completely unprepared. I say yes. She raises her eyebrows. Uh-oh. Wrong answer. She then tells us of two marinas where we must dispose of the garbage. Her second and final question is about whether we have any fruits and vegetables on board. The boat is docked right outside and, in my mind, I can see the crate full of potatoes, grapefruit and pears – not to mention everything in the fridge. What I want to say is Lady, we’re a family of four living on a boat. Of course we have fruit and vegetables on board! I can tell she wants to get back to watching the game. I’m not going to lie. I hesitantly say, “Yes?” in a questioning way. She frowns. Uh-oh. Again, wrong answer. Matt steps in and saves the day by saying “We’ll keep our garbage on the boat until we get back to the BVI and not take any fruit or vegetables on shore while we’re on the US side.” Ohhhh, I finally get it. Of course, that’s her job – preventing international pest infestation. I am greatly relieved there is no onboard inspection. We walk out and quickly leave the dock before they decide to run after us. 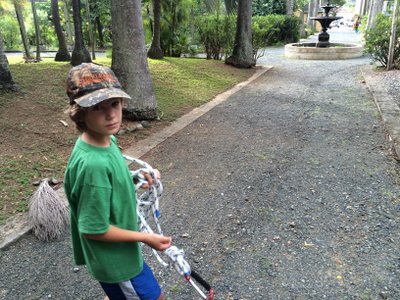 We weather out the trades at Great Cruz Bay and then sail across to Red Hook, St. Thomas in 25-35 knot winds. It’s nice that we’ve reached the stage where it’s just not a big deal. We do the usual routine of showers-water-fuel-provisions and, because I can refill the water tanks, the boys and I do a thorough cleaning of the boat while Matt does laundry. I’ve talked to the boys about blending in with local culture and keeping a low profile, particularly in light of financial stereotypes of American tourists. I walk topside and am appalled when I see Malachi using clothespins to hang US bills from our lifelines. “What are you doing?” I hiss. He looks at me in confusion and says innocently, “My money got wet. I’m drying it.” We sit down for a chat and I think he gets it – I might’ve mentioned the word pirates. On Wednesday we go back to Soper’s Hole and re-enter the BVI. We then head to Road Town, Tortola to stop at Digicel and then get some school supplies. We are too tired to go further and decide to anchor here before leaving for Anegada the next morning.