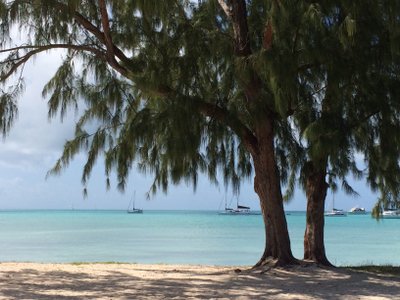 The BVI is such an amazing place to explore because there are so many different islands and they are relatively close together – yet each fairly unique. Anegada is by far the furthest away and the northernmost of all the islands. We leave early with winds that are 20-25 knots, with all three sails out and a reef in the main. We are going at 7 knots and it feels great. We pass a charter cat that is barely moving. They only have their headsail up which doesn’t work with this wind direction. They look at us in bewilderment as we fly by them. 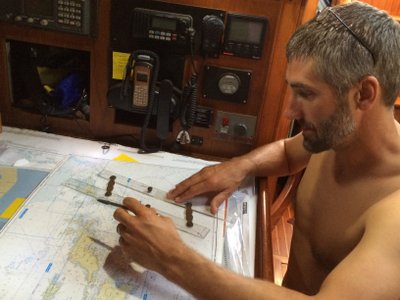 Matt mumbles something to me about having an anchor light on when at anchor. He is rarely snarky so I find it funny when he is. He sets a trajectory and puts in waypoints along the way to make sure we’ll hit the entrance to the channel at the correct angle. He is in his element. We arrive without needing to tack even once. 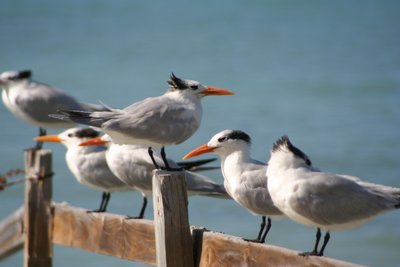 At its highest point, Anegada is only 28 feet above sea level and is fairly unpopulated. Rather than having a ‘town’ or even a ‘village,’ they have a ‘settlement.’ When Matt and I were here over ten years ago, forty people lived on the island. Today there are 400 but 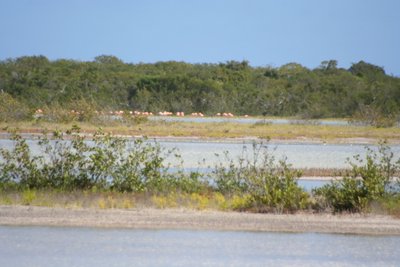 The pink dots on the horizon are flamingos, not swine. Trust me.

it doesn’t seem it. On Friday, we take a long walk to see the flamingos in the salt ponds and then go swimming to try and clean off some of the growth on the underside of the boat (a clear hallmark of a boat owner vs. a boat charterer).

On Saturday, we take a taxi to the other side of the island to visit Loblolly Bay – one of the island’s beautiful beaches. It is obscenely gorgeous. We get there early and snorkel with the boys, seeing a sting ray and fish (alas, no sharks). The boys get cold so we head back to shore, place an order for lunch at the only 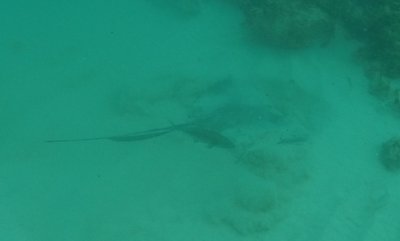 The outline of a sting ray burrowing in the sand

restaurant there (Big Bamboo) and then Matt and I go back out to snorkel while the boys play in the sand. After another round of the reefs, we head back to shore with Matt in the lead. When I snorkel, I am always looking around for some new exotic creature. When I finally look straight ahead, it takes me a moment to figure out what the bright white thing ahead of me is. I finally realize that Matt is still swimming ahead of me but has pulled his swimsuit halfway down. I start laughing so hard that I choke on a mouthful of salt water. Probably not the best idea with a photo-happy wife who has a blog but, unfortunately, my camera battery died [fortunate for him (and probably for you) or his bum would be posted on the internet]. 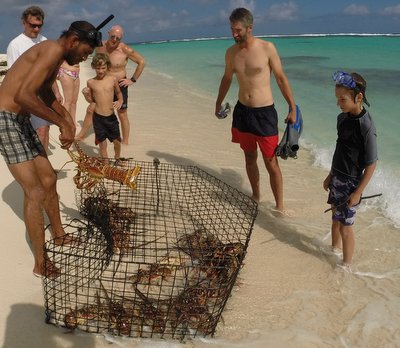 Lobster for lunch. Before …

The specialty on the island is Anegada lobster and this is what I have ordered for lunch (Matt has a shellfish allergy so, sadly, I must eat lobster alone). We get back to the beach in time to see them pull the lobster trap out of the water and pull my future lunch out of the trap. In the open-air restaurant, we still have a view of the water. Our lunch arrives, including my huge and beautiful lobster … as well as about 75 large flies. They are aggressive and it takes all four pairs of our frantically waving hands to keep them off most of the food. 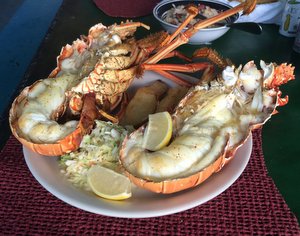 I have never seen so many flies in one small space. At that same moment, there is a shrill whistle and what looks like a homeless man standing at the edge of the restaurant. Picture an emaciated John Lennon at 75 with a t-shirt so tattered it’s barely hanging on. He is clearly an ex-hippie (albeit one who did not leave the commune to sell out and take a corporate job) and says that he would appreciate money or a free drink. In return for this, he mumbles some jokes and does some juggling –

whistling shrilly if someone’s attention dares go back to their lobster or their flies. We whisper to each other that we’ll give him $20 to stop. I wonder how the owner can allow this – but then we meet the owner. He either has a neurologic condition or he’s on drugs. He’s friendly but neither Matt nor I have any idea what he’s saying. When the entertainment is done, we give the ex-hippie some money and he goes to the bar. It is a perfect melding of the sublime and the ridiculous – and it guarantees that we will not forget this experience.